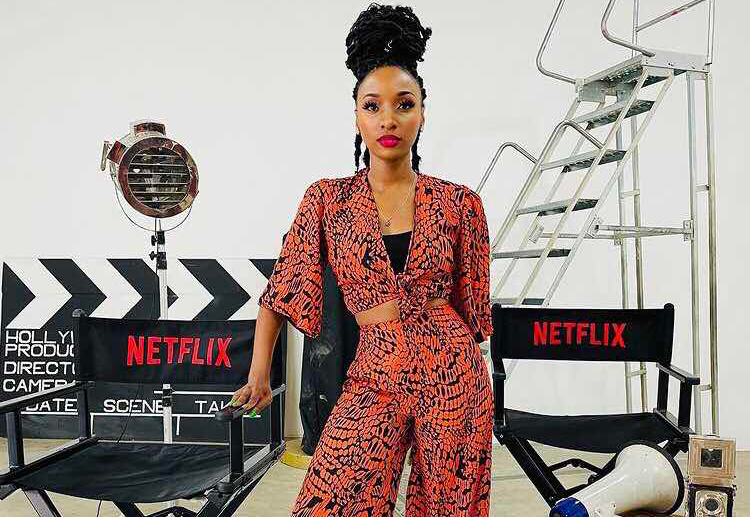 SOUTH AFRICA: The Cape Town-based filmmaker’s refreshing combination of cool confidence and whimsy comes across even before we’ve sat for the interview.

“Hi, can we re-schedule?” a breathless voice says when I answer the office phone in Johannesburg about an hour before we’re supposed to meet.

Johannesburg is in the midst of a suffocating heatwave and I’m glad to push back the meeting time, take a breather.

But the calendar is looking chock-a-block. I hesitate.

Half an hour later, she’s found her bearings and sounding cool, calm and collected when the Teams interview starts.

I wonder aloud if we shouldn’t reschedule until she’s back in the city, but she’s adamant the show must go on.

I imagine the petite-framed lady chilling on a mountain top, a little lost but unfazed as she says, “I’ve found a bit of shade.”

It’s the kind of composure founders are made of.

She is one half of Totem Zea, which she started three years ago with Reabetswe Moeti-Vogt (2018 Safta Golden Horn winner, Best Achievement in Scriptwriting – TV Drama, for Lockdown).

“Our latest project is a Netflix film which we just finished production for called Real Estate Sisters. It’s set to be launched on Netflix in 2023,” Zoe shares.

It’s one of six films that were selected to get financing of about R4 million each in a Netflix and National Film and Video Foundation (NFVF) partnership last year.

The premise is delightful.

Two broke Pretoria real estate agents, who also happen to be sisters, are determined to make a mark in the industry, one Mamelodi backroom at a time.

It’s comedy-mystery, Zoe explains, and based in Pretoria because Tshwane tends to be “very underrated in terms of film”.

“The film is a portrait of a city. The sisters are selling backrooms in Mamelodi and Sunnyside flats.

“They have big dreams to sell mega mansions and become the next Pam Golding.”

Things take a dark turn after they get a lavish Waterfall Ridge property to sell. “There’s a dead body inside.”

The filmmaker promises a lot of “Pretoria flavour” in Real Estate Sisters, from the music to the styling and dialogue.

Zoe says she had no filmmaking experience when she decided a few years, ago, ‘I think I can make a reality series’ – with not much of a budget.

“It’s the bravery of ignorance,” exclaims the Zimbabwean-South African filmmaker, who will be among some of the talented producers and storytellers from our continent showcasing their work at the Creative Producer Indaba on 7 November 2022 – a pretty huge deal because it’s a platform to pitch to international funders in the film industry.

The 32-year-old chuckles in disbelief when she recalls her first attempt at filmmaking. “It was a cooking show. My aunt had just redone her Airbnb kitchen and I filmed the whole thing in there.

“I had no background in film at all at that time. I had studied law at Wits, that was my background, and then I was doing my master’s in African literature and cinema, so I decided, ‘Okay, let’s try this film thing out.’”

It turned out she was pretty good at this film thing.

“There were definitely people who had expertise in terms of camera work. But there just wasn’t a lot of support for filmmakers in Zimbabwe – there isn’t, up till today.”

“We have a brilliant line-up of experts this year who will be meeting the producers, including Femi Odugbemi, Katriel Schory, Dayo Ogunyemi and IFFR Festival Director Vanja Kaludjercic,” says Realness Institute’s head of studies and executive director, Elias Ribeiro.

“The institute is doing such good work. Not only giving more global platforms to African filmmakers, but also in building collaborations between filmmakers on the continent,” Zoe tells Drum.

“Filmmaking is glamorous 10% of the time, the other 90% is hard work. That can often be very lonely, so having a community of people with shared experiences is crucial.”

Platforms such as this also make this a special time to be a filmmaker, she says, which is why she urges anyone who has as dream of making stories to just do it. Now, please.

Just as she did in her aunt’s newly remodelled Airbnb kitchen.

“In South Africa, there is a lot of support for filmmakers,” she reflects.

“There are parastatals who will feed into your work; obviously, the major broadcaster and Multichoice are based here; and there’s a lot of drive for content that’s from here.

“Zimbabwe doesn’t have that kind of support, which makes it a whole lot harder to make stuff out of there – despite the fact that there are so many good stories and dedicated filmmakers who are still putting content out there.”

She mentions Gonarezhou The Movie, as one such example.

“There’s a lot of great work coming out of there. There are a lot of great Zimbabwean filmmakers who are making it outside of Zimbabwe in the diaspora.” She laments this fact but relishes the opportunity to be able to collaborate with other creatives on a global stage.

“Our generation of filmmakers is very privileged to be able to walk into rooms and believe that people want to know your story the way you want to tell it. There is an appetite for hearing what you have to say, the way you want to say it. That wasn’t the case before.

“Now it’s on trend to be yourself; to be a young person who is black and is a female. People are suddenly, like, ‘Oh, tell us your stories!’ She did her MSc at prestigious Ivy League school Columbia and is one of the co-founders of SWIFT.
Supplied

“We are obviously standing on the shoulders of giants. But it’s a completely different story for us because we have a bit more confidence in being African and female and walking into this space; you walk into a room with a different energy.

“So it is a definite privilege to get this kind of international attention and to speak to people who have been doing this for a long time and to know that they want to hear what you have to say; that you actually have something that they don’t,” says the Columbia University MSc graduate who is also one of the founders of Sisters Working in Film and Television (SWIFT), the organisation behind the #ThatsNotOk campaign targeting sexual harassment in the industry.

“You have your own experience that may sometimes be painful, humiliating or more than what you would’ve wished for yourself when you were growing up – for instance, growing up and watching Little Mermaid and wishing your hair was straight.

“But you can now put all of these experiences into your own cinematic language because that’s what people have an appetite for now, as there are thousands of us out there who also are open to seeing those experiences reflected. And there’s no way that’s going to come from a white man. There’s no way he can write that stuff. You’re the only person who can.”

As a Christian, Zoe says service is important to her, which is why she co-founded SWIFT. “I’m actually super-stupid proud of what it’s become!”

She is no longer involved in the organisation but she remains an advocate for the visibility of diverse voices campaigning against sexual harassment in the film industry.

“Ultimately, I want to be in the kind of industry that I can work in.”