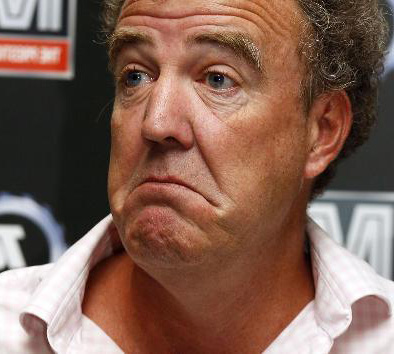 JEREMY Clarkson faces possible police action for an “unprovoked physical and verbal attack” that left a Top Gear producer with swelling and a split lip.
Clarkson, 54, assaulted Oisin Tymon for around 30 seconds, while shouting “derogatory and abusive language” so loudly it could be heard in a hotel bedroom, a BBC report has found.
The attack at the Simonstone Hall Hotel, in North Yorkshire, was only stopped when a witness intervened, BBC Director General Tony Hall said.
Now North Yorkshire Police has asked the BBC for its report and said action will be taken “where necessary”.
Hall said the Top Gear presenter’s contract will not be renewed and the decision was taken with “great regret”.
He said he had spoken to both men and was publishing the findings of the BBC’s internal investigation, though he added that he took “no pleasure” in doing so.
The investigation heard Tymon drove himself to A&E after he was attacked by Clarkson on 4 March.
In a statement, North Yorkshire Police said it “is liaising with the BBC regarding the alleged incident in North Yorkshire involving Jeremy Clarkson”.
“We have asked the BBC for the report which details the findings of their internal investigation into the matter.
“The information will be assessed appropriately and action will be taken by North Yorkshire Police where necessary.”
Speaking after the decision was announced, Tymon said: “I’ve worked on Top Gear for almost a decade, a programme I love.
“Over that time Jeremy and I had a positive and successful working relationship, making some landmark projects together.
“He is a unique talent and I am well aware that many will be sorry his involvement in the show should end in this way.”
In his statement, Hall said: “I cannot condone what has happened on this occasion.
“A member of staff – who is a completely innocent party – took himself to Accident and Emergency after a physical altercation accompanied by sustained and prolonged verbal abuse of an extreme nature.
“For me a line has been crossed. There cannot be one rule for one and one rule for another dictated by either rank, or public relations and commercial considerations.”
The report said “verbal abuse was directed at Oisin Tymon on more than one occasion – both during the attack and subsequently inside the hotel – and contained the strongest expletives and threats to sack him.Advertisement

“The abuse was at such volume as to be heard in the dining room, and the shouting was audible in a hotel bedroom.”
Hall said “no blame” was attached to Tymon, who, he said, “behaved with huge integrity throughout”.
Despite this, Tymon has received death threats from Twitter-users who blame him for Clarkson’s departure.
Top Gear co-presenter James May told Sky News that Clarkson’s sacking was a “tragedy”.
“What ought to have been a small incident, sorted out easily, turned into something big,” he said.
He said he was sure Top Gear would “continue in some way” but could not say if he would stay because he, Clarkson and Richard Hammond “come as a package”.
Later, May said his future at Top Gear “requires much thought, deliberation and conversation” before he makes a decision.
Hammond tweeted: “Gutted at such a sad end to an era. We’re all three of us idiots in our different ways but it’s been an incredible ride together.”
The trio’s Top Gear contracts run out at the end of the month, although Mr Hall said the BBC wanted to “renew” the show for next year.
Clarkson has not commented publicly, but has changed his Twitter profile to: “I used to be a presenter on the BBC2 motoring show, Top Gear”.
May also changed his to say “former TV presenter”. Hammond’s profile is unchanged.
It is not known if Clarkson, who has made a number of previous gaffes on Top Gear , is in talks with other TV companies.
David Cameron, who referred to his friend Clarkson as a “huge talent” when the incident emerged, said “aggressive and abusive behaviour” is not acceptable.
At a briefing in Westminster, his spokesman said: “What the Prime Minister would say is if you do something wrong at work there can be consequences.
“Aggressive and abusive behaviour isn’t acceptable in the workplace or elsewhere.”