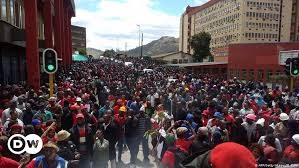 Lately, eSwatini, formerly known as Swaziland, has been witnessing the largest anti-government protests since it became independent from British rule 53 years ago.

In a statement, young people under the Southern African People’s Solidarity Network (SAPSN) banner have called on regional leaders to hear out their plea for an immediate intervention aimed at averting political unrest in eSwatini Kingdom.

“We condemn SADC leaders’ failure to announce a Regional position on Eswatini during the Lilongwe SADC Summit held in August and urge SADC leaders to convene an Extra-ordinary Summit to formulate a regional plan of action on eSwatini.We plead with SADC leaders to urgently facilitate an inclusive national dialogue process to help the people of Eswatini make the transition from monarchical dictatorship to a just, equal and prosperous society,” SADC youths said demanding release of the regional bloc’s fact finding mission report into eSwatini.

SAPSN youth network also appealed to SADC leaders and International community to act on the ongoing humanitarian and economic crisis in the last monarchy of Africa.

“We call upon SADC leaders and the International Community to respond to the deteriorating humanitarian and economic situation in eSwatini which disproportionately affects women, youth and marginalised communities in the context of an already unequal and impoverished society. So far, the cries of the Youth of eSwatini have been met with violence, repression, social media shutdowns and disruptions to schooling and access to public services. Young people continue to suffer the most,” reads part of the statement.

The youths also demanded for a constitutional democracy whereby free and fair elections will be conducted in eSwatini under supervision of SADC and International community.

They rallied in solidarity with eSwatini youth movements’ call for scholarships and jobs paid for through taxation of wealth centred around opulent King Mswati 111.