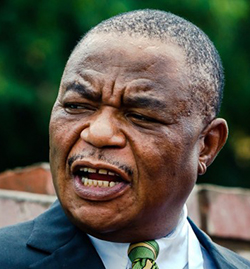 VICE President Constantino Chiwenga vowed Wednesday to “honour that great son of the soil” as he expressed his “sadness” over the death of former Prime Minister and MDC-T leader Morgan Tsvangirai.
Tsvangirai finally succumbed to colon cancer at a South African hospital after a protracted battle with the dreaded disease.
His passing on ignited an outpouring of condolence messages from among both friends and foes, with Chiwenga being the most senior government and Zanu PF official to express sadness over the death of a once fierce rival.
“We are saddened by the death of MT, we will sit and see how Zimbabweans can honour that Great son of the soil,” Chiwenga said in a Tweet Wednesday night.
Norton legislator Temba Mliswa described Tsvangirai as “a true democrat who fearlessly stood up to the Mugabe regime and was an inspiration to many”.
He added, “Although we may have differed politically I held a deep respect for MT. My condolences to his family. MHDSRIEP.”
Exiled former Local Government Minister and Zanu PF political commissar Saviour Kasukuwere also said Tsvangirai would live forever in many people’s hearts.
“To live in the hearts of others is never to die. Your memory will forever be in the hearts of Zimbabweans. You fought a good fight, RIP Save (Tsvangirai’s totem).”
Former Deputy Prime Minister Arthur Mutambara was also saddened by his former ally.
He posted on Twitter, “A sad day indeed. MT is gone. A great Zimbabwean. A committed patriot. An exemplary leader. A distinguished fighter for democracy and social justice. MHSRIP.”
MDC President Welshman Ncube was also emotional. “Devastated! Numb!” he said on Twitter.
Former Primary and Secondary Education Minister David Coltart said he was “very sad to hear that Morgan Tsvangirai has lost his brave final battle” adding that “He will remain one of the giants.”
Tsvangirai’s lieutenants within the MDC-T also mourned their leader with party spokesperson Obert Gutu posting on his personal Twitter account that Tsvangirai was “an indefatigable fighter for peaceful democratic change in Zimbabwe, a political icon, a humble and tenacious fighter for the creation of a peaceful, stable, democratic and progressive nation state in Zimbabwe.”
Harare West legislator Jessie Majome said, “the colossus of the struggle for democracy in Zimbabwe & beyond has fallen! The people’s hero is gone. May your dream materialize in our life time.Advertisement

“Thank you for making me believe that change is possible, the courage & to fight for it, & an opportunity to. RIP Morgan Tsvangirai.”
#ThisFlag founder and firebrand cleric Evan Mawarire described Tsvangirai as a “doyen of democracy and justice in our time”.
He added, “Thank you for making it possible for people like me to find the courage to say ENOUGH IS ENOUGH, HATICHADA, HATICHATYA. Zimbabwe owes you a great debt. REST IN POWER mukuru #RIPMorganTsvangirai hambani kahle.”
Addressing a news conference following the resignation of South African President Jacob Zuma Wednesday night, ANC deputy secretary general Jessie Yasmine Duarte said South Africa’s governing party also condoled with Zimbabwe and Tsvangirai’s family.