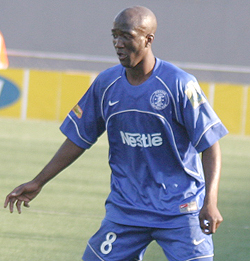 ZIMBABWE international striker Edward Sadomba scored his fifth Champions League goal of the 2014 campaign when his Libyan team Ahly Benghazi grabbed their first win of the group phase in Tunisia.
Perennial Egyptian campaigners Zamalek also boosted their chances in the premier continental club championship after registering their first win as well.
Libyan side Ahly Benghazi beat Esperance Sportive de Tunis 3-2 in the Group B fixture in Sfax, the second successive loss for the Tunisians at this stage, whilst Zamalek coughed out a 2-1 win over Al Hilal of Sudan in their Group A clash in Cairo.
For Esperance, the result further pushes them to the bottom of the standings after failing to pick a point from the two games so far.
The defeat will increase pressure on Dutchman Ruud Krol and his charges for a turnaround in the subsequent matches to remain in contention.
The Libyans broke the deadlock after five minutes through Zimbabwean import Sadomba before Farag Mbarak doubled the lead seven minutes later to give the hosts a commanding lead.
Sadomba has been recalled to the Warriors by coach Ian Gorowa as Zimbabwe prepares for the make or break 2015 African Cup of Nations first round second leg qualifier in Harare on Sunday.
Gorowa’s men lost 1-0 in the first leg, in Tanzania and the Warriors gaffer who will be hoping Sadomba can get him the goals to qualify to the next round.
Zimbabwe needs to score two clear goals to qualify.Advertisement