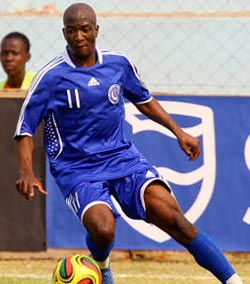 THE Warriors received a further boost in their quest to qualify for the next round of the 2015 Africa Cup of Nations qualifiers Thursday night when Libyan-based striker Edward Sadomba finally joined camp.
The injury-hit Warriors, down 1-0, from the first leg, play Tanzania at the National Sports Stadium on Sunday in the return leg of the tie, desperate to avoid being knocked out at the first hurdle.
Team manager Shari Mussa said: “Sadomba arrived last night (Thursday) and this gives the technical team further options ahead of the match.”
Sadomba played for his side Al Ahli Benghazi in the Caf Champions League on Saturday against Esperance in Tunisia, scoring his fifth goal of the tournament, but faced challenges on his return to his base because of the political situation in Libya.
When he eventually arrived back with the rest of the team, he failed, for two days to get a flight to Harare and eventually managed to make the trip on Thursday night.
Despite arriving late, the Warriors technical team will likely be delighted with his presence after a series of injuries to key players since the first leg in Dar es Salaam a fortnight ago.
Key striker Knowledge Musona was injured at Kaizer Chiefs last season and ruled out for six weeks while Khama Billiat also failed to last the distance at Mamelodi Sundowns.
Kuda Mahachi was injured in Namibia after he had linked up with his team Mamelodi Sundowns for a one day tournament and went to South Africa for treatment.
Midfielder Peter Rio Moyo lasted only 26 minutes in Highlanders’ 3-1 win over Buffaloes in the Premier League last weekend and faces two weeks out.
Simba Sithole of Ajax Cape Town was also injured ahead of the first leg and is out.