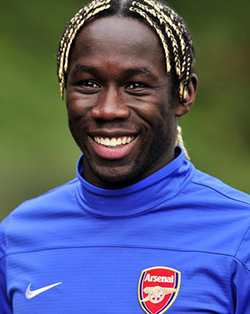 BACARY Sagna will be leaving Arsenal “for sure”, the defenders has told reporters in France.
The France international full-back’s contract situation became a long-running saga during last season, with boss Arsene Wenger asked about it on a weekly basis.
The 31-year-old has yet to accept the offer put before him and now appears to have said he will not be doing.
Sagna has been widely linked with a move to champions Manchester City and, although he did not commit to saying where he would be next season, it will not be Arsenal.
“It’s no longer a secret, I will leave Arsenal for sure,” he told L’Equipe.
“They (Arsenal) tried to make an effort but the discussions have not gone as I wished.”
The former Auxerre man’s final game in an Arsenal shirt now looks set to have been the FA Cup Final win over Hull two weeks ago.
“There is no ideal end but it was a dream to finish like that, at Wembley, with the cup,” he added.
“It was an honour to wear the shirt.”
Sagna refused to comment on who his next club would be but added “I’ll fix that before the start of the World Cup”.Advertisement