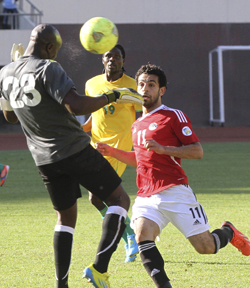 MOHAMMED Salah’s hat-trick extinguished Zimbabwe’s hopes of qualifying for the 2014 World Cup in Harare on Sunday.
Mohamed Aboutrika stunned the National Sports Stadium into silence five minutes into the contest after skipping past Felix Chindungwe and a static Lincoln Zvasiya to slot past Washington Arubi.
Knowledge Musona brought the hosts level when he benefitted from a blunder by Egypt’s central defender Mahmoud Fathallah to lob over keeper Sherif Ekramy in the 21st minute.
Salah then sprung the offside trap after the ball was played behind a sleeping Chindungwe to thrust Egypt back in front going into the break .
The Warriors were more offensive at the start of the second half after Khama Billiat was thrown in for Chindungwe, but they still needed a safe pair of hands from Arubi to keep the Egyptians at bay in the 61st and 62nd minutes.
Just when things were looking brighter for the Warriors, Salah added more misery when he collected a pass from Aboutrika, danced past Zvasiya to go one-on-one with Arubi before slicing home with the outside of his foot for a 3-1 lead.
Zvasiya ensured a nervy finish with a header in the 85th minute but Salah had the last say as he beat Patson Jaure and Arubi for a 4-2 win.
It was the Pharoahs’ first ever win over Zimbabwe away from home. They lead the group with 12 points from four matches heading into the last two qualifiers against Guinea and Mozambique.
For Zimbabwe, it was lights out as the defeat left them with just one point.
Despite the loss, Warriors coach Klaus Dieter Pagels believes they have to continue working hard for the next two matches against Guinea next week and Mozambique in September.
“We made two blunders in each half and we paid dearly for that. We still have a lot of work to do and I believe that going forward, things will work out,” he said.
Advertisement