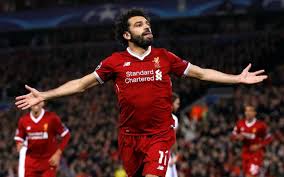 This story is from the AFP

Liverpool swept Manchester City aside with a three-goal blitz in 19 first-half minutes to take a commanding 3-0 first leg lead in their Champions League quarterfinal.

Champions-elect City lead Liverpool by 18 points in the Premier League, but their only league defeat this season came in a 4-3 thriller at Anfield in January, and they suffered an even worse fate on Wednesday to leave their hopes of winning the European Cup for a first time hanging by a thread.

Just as in the January meeting between the sides, the prolific Mohamed Salah, Alex Oxlade-Chamberlain and Sadio Mane were on target for the hosts.

However, a perfect night for Liverpool was marred when Salah limped off with an injury early in the second half.

City could already be crowned English champions by the time the sides meet again for the second leg in six days’ time should they beat local rivals Manchester United on Saturday.

However, it will take an extraordinary Etihad turnaround if they are to make just their second ever Champions League semifinal.

City were well aware of the cauldron they were facing from the off as their team bus was battered by bottles and cans on their arrival at Anfield.

Liverpool boss Jurgen Klopp was quick to apologise as were the club in a strongly-worded statement condemning the actions of their own supporters.

The atmosphere was equally electric inside the stadium for Liverpool’s first Champions League quarterfinal for nine years.

However, it didn’t immediately appear to shake City out of their rhythm as the hosts controlled possession for the opening 10 minutes.

City, though, remained susceptible to the speed of Liverpool’s forwards and the visitors were caught out on the counter-attack on 12 minutes when Salah sprang Roberto Firmino in behind the City defence and, after his initial effort was parried by Ederson, Firmino teed up Salah to smash home his 38th goal of the season.

Liverpool’s stunning first-half destruction of Manchester City in the first leg of their Champions League quarterfinal on Wednesday was slightly soured after prolific winger Mohamed Salah was forced off with an injury.

Salah opened the scoring with his 38th goal of the season as Liverpool raced into a 3-0 lead over the Premier League champions-elect inside 31 minutes at Anfield.

However, the Egyptian appeared to pull up with a muscle injury minutes into the second period before being replaced by Georginio Wijnaldum.

City should have struck back straight away when Leroy Sane pulled his shot wide from the edge of the box as City outnumbered the Liverpool defence on a quick break of their own.

However, they were soon swept away in the euphoria engulfing Anfield as Oxlade-Chamberlain pounced on a loose ball on the edge of the area and rendered Ederson helpless with a stunning strike from 20 yards.

The composure that has characterised City’s record-breaking Premier League season ebbed away as misplaced passed were gobbled up by wave upon wave of Liverpool attack.

A third duly arrived as Salah stood up a cross to the far post for Mane to head in and take Liverpool’s prolific front three’s tally for the season to 77.

Liverpool’s night was soured when Salah limped towards the touchline eight minutes after the restart with a muscle injury that will make him a serious doubt for the second leg.

Guardiola turned to his bench moments later to introduce former Liverpool winger Raheem Sterling, who had been surprisingly left out from the start, to add even more spice to the atmosphere.

The Liverpool faithful had to try and carry their tiring side over the line in the second half as City pressed relentlessly for an away goal that would get them back in the tie.

However, the precise passing that is often the trademark of Guardiola sides deserted the Catalan’s charges as their final ball was consistently inches off target and Liverpool held out for a priceless clean sheet.