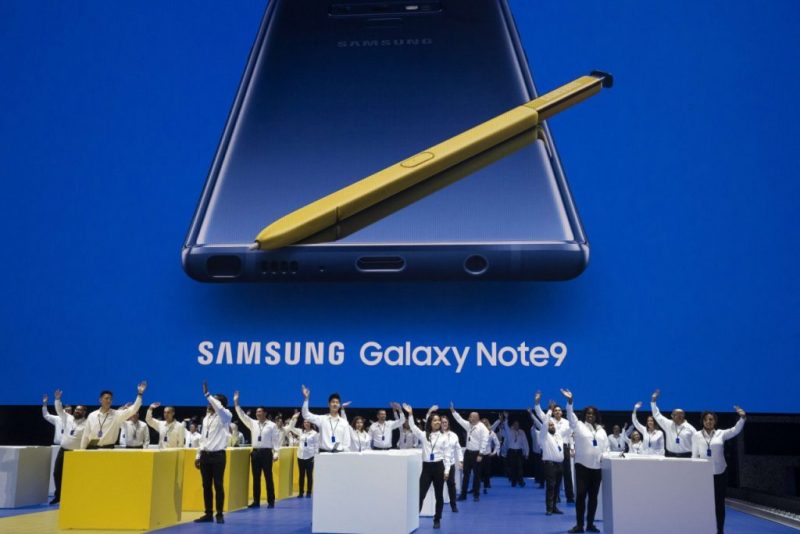 Boosting the power and the price, Samsung hopes to win back customers in the competitive market. The consistent leader in the global smartphone market, the company nonetheless suffered a 22 percent drop in mobile technology sales in the second quarter.

The company blamed the drop in part to disappointing demand for the Galaxy S9, but it also has been pressured by growth in Chinese competitor Huawei.

At a glitzy the launch event in Brooklyn, Samsung unveiled a suite of high tech products, including a smart speaker and watch, and then showed off the new Galaxy Note 9, which will be available for purchase on August 24.

The phone contains a series of improvements but was described by analysts as having no radical new innovations. The latest model boosts memory capacity, and allows customers to play video games such as the popular Fortnite.

Customers will have the option of 128 or 512 gigabytes of memory, and also can insert a micro card to boost capacity beyond a terabyte, a record for a smartphone.

Samsung also enhanced the gadget’s batteries so it can now be used for an entire day without needing to be recharged — a common headache for cell phone users.

Other improvements include tweaks to the device’s “S Pen” feature, which can be used as a remote control for taking pictures or selfies using Bluetooth technology.

And the new model has enough capacity for video games. Samsung has set up a promotion with the popular Fortnite game that lets users download a special mobile version.

According to some trade media sources, the Galaxy Note 9 version with 512 gigabytes will be the most expensive smartphone geared towards the general public.

Avi Greengart, analyst at GlobalData, described the upgrades in the latest Samsung as “iterative,” adding “there is nothing radically new here.”

Founder and CEO of Spotify, Daniel Ek, speaks at the event where Samsung announced its partnership with Spotify to have seamless music streaming across all devices

“It’s a really expensive phone and for people who are looking for a premium Android phone, they may well find it quite appealing,” he said. “But it isn’t likely to get people to consider the Note for the very first time.”

By contrast, Apple’s more dramatic overhaul of the iPhone X design and user interface showed there is a “large group of people who are willing to spend whatever it takes” to upgrade, Greengart said.

Samsung also introduced the Galaxy Watch and the Galaxy Home speaker device, a first for the South Korean company in a market that already contains Amazon’s Echo and Alphabet’s Google Home program.

The company also announced a partnership with streaming music service Spotify to allow “streamless listening” across all Samsung devices, including phones, tablets and smart TVs, as well as the Galaxy Home.

The smart speaker may have a better shot outside the United States, said Patrick Moorhead, analyst at Moor Insights & Strategy.

“In the US, Alexa is very entrenched and so is Google Assistant, so it might be a challenge, but not so much in other parts of the world,” Moorhead said.