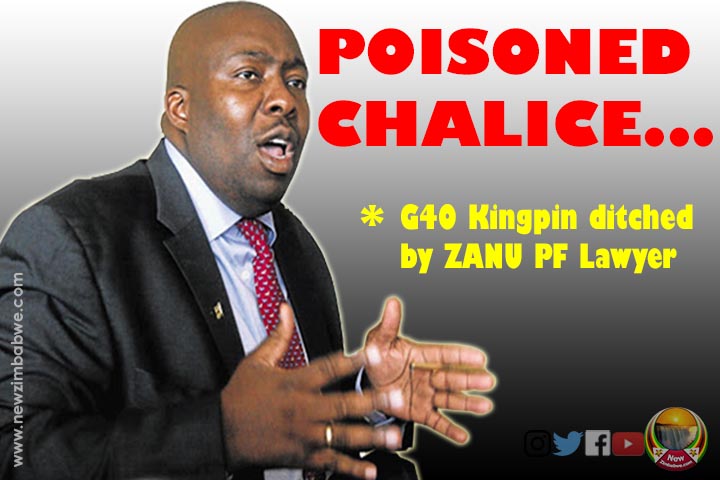 PRESIDENT Emmerson Mnangagwa has reportedly ordered Zanu PF MP and top lawyer Jonathan Samukange to dump Saviour Kasukuwere to whom he was legal representative in a case in which the former party political commissar is being tried on alleged criminal abuse of duty.

This is according to a letter addressed to the Harare Regional Court by Venturas and Samukange Legal Practitioners.

“Be pleased to take note that Venturas and Samukange hereby renounce agency for and on behalf of the accused (Kasukuwere),” reads the letter undersigned by the lawyer.

In an interview with NewZimbabwe.com Thursday afternoon, Samukange all but confirmed his decision was made under duress.

“That’s true. There is conflict of interest,” he said of the case.

This is after he had appeared before a Harare magistrates’ court facing charges relating to his alleged parcelling out of tracts of State land to former First Lady Grace Mugabe’s sister when he was still Local Government Minister.

He is among some former cabinet ministers linked to the now vanquished G40 faction within Zanu PF who have since been taken to court facing cases of corruption.

Kasukuwere hired Samukange to defend him but the decision backfired when the Zanu PF youth league last week harangued the latter accusing him of acting contrary to Mnangagwa’s resolve to fight corruption.

Samukange said he had thought through his decision and found it inappropriate to defend someone accused of corruption.

“What it means is that as legislators, we had taken a position that there should be zero tolerance to corruption and we have urged government, including His Excellency, that they should pursue the issue of corruption and leave no stone unturned and I said that in parliament. It becomes difficult for me to represent Cde Kasukuwere who is being charged for corruption. That is the problem,” Samukange said.

“If he was facing something other than corruption, there would be no conflict.

“This is very direct. Exactly what we have been saying…when I was campaigning, I was also saying pasi necorruption and I think the youth from Mudzi South are right to say there is conflict of interest and when I looked at it, I agreed.”

Asked if he was forced to abandon the case following pressure by the Zanu PF youth league, Samukange responded, “They prompted it naturally. Yes, they started it and I looked at it and said, yes they are right.”

Sources said Samukange was phoned personally by President Mnangagwa ordering him to dump the President’s once bitter Zanu PF rival.

When demands for him to dump Kasukuwere were made by party youths last week, Samukange said his controversial client was “innocent until proven guilty”.

By hiring a top Zanu PF politician as his lawyer, Kasukuwere broke from the usual tradition by party loyalists who have been opting for the services of opposition politicians who are lawyers.

Mliswa and Mutasa were fighting expulsion from parliament while Chombo faces corruption charges.