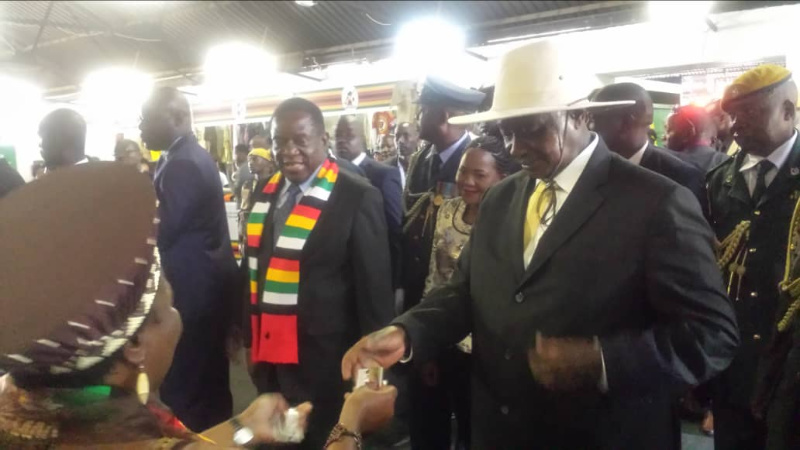 PRESIDENT Emmerson Mnangagwa and his predecessor former President Robert Mugabe, could have used the issue of sanctions imposed by Western powers as a scapegoat against their own failures, visiting Ugandan leader Yoweri Museveni has said.

Although he did not mention Mnangagwa and Mugabe by name, Museveni said the sanctions have clouded any judgement that can be passed on the performance of the Zimbabwean leaders.

Museveni, was keynote speaker, at the Zimbabwe International Trade Fair (ZITF), that ends in Bulawayo today. The Ugandan strongman, who has been in power for over three decades described the imposition of sanctions as an “act of cowardice.”

“On behalf of Uganda I would like to condemn the sanctions being put on Zimbabwe for a long time. This idea of sanctions as an act of cowardice.

Former President Robert Mugabe and now his successor President Emmerson Mnangagwa have blamed Zimbabwe’s socio-political and economic problems on the sanctions imposed by the US and the EU in a bid to force Harare to stick to democratic practices.

Mugabe was slapped with travel restrictions by the EU, while the US enacted the Zimbabwe Democracy and Economic Recovery Act, at the turn of the century accusing Harare of harassing the opposition and electoral fraud.

This was after Mugabe embarked on a land expropriation program that the then Zanu PF leader argued, was aimed at redressing colonial land imbalances, tilted in favour of a few thousand white commercial farmers.

Added Museveni: “That’s means we are not sure if the man is wrong. Otherwise if he is wrong let him fail by his own his mistakes.

“If you put sanctions you are just aiding someone to use them as scapegoat for his own failures. I appeal to those who are imposing sanctions on Zimbabwe to lift those sanctions.”

He blamed African countries for lacking unity in fighting off the measures adding counter sanctions could have worked.

“A good example is China, if someone impose sanctions on them they also counter. So the equation is balanced. Here we have an equation which is not balanced, its one sided forever and ever.

“I don’t agree with those who say Africa is weak. In 1960s, we were weaker than we are today but we were able to work together and support the struggle for freedom in southern Africa and succeeded,” said the Ugandan leader who took power after a protracted rebellion in 1986.

“We worked for the liberation of Zimbabwe, Mozambique, South Africa and Angola Namibia supported by socialist countries but our great effort was ours.”

This year’s ZITF was held under the theme Propagating Industrial Growth through Trade and Investment.