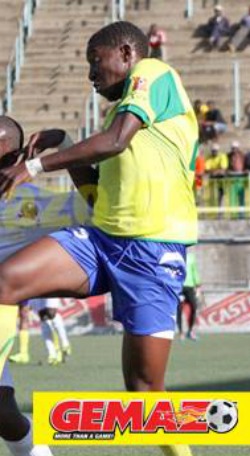 FRANCESCO Zekumbawira has failed to make the grade at South African Absa Premiership side Bidvest Wits and will feature for Harare City again this season.
Zekumbawira had impressed in the early stages of his trials, but coach Gavin Hunt was unconvinced in his final technical report to the Castle Lager Premier Soccer League side.
City spokesman Mathew Marara confirmed that the giant striker, formerly of Zim Leopards, Hwange and Dynamos, had failed to make the grade and will be in their colours this season.
“His agents were also trying to get him to Free State Stars but that has not materialised as well. So he will feature for us this season unless something comes up before the SA window closes at the end of the month,” Marara said.
City are on a rebuilding mode after hiring former Caps United coach Taurai Mangwiro, who has already brought in Tendai Samanja and Tafadzwa Dube from his former side and former Buffaloes and Dynamos defender Temba Ndlovu.
They are also understood to be on the lookout for out-of contract Devon Chafa with the aim of solving the anchor man’s position.
So far no Zimbabwean player has moved to the Absa Premiership or Europe this transfer window with only former Monomotapa and Dynamos attacking midfielder Ronald Chitiyo opting for a two year contract at First National Division One side Royal Eagles.
Former FC Platinum and Highlanders midfielder Charles Sibanda is set to join Power Dynamos in Zambia while former Dynamos striker Washington Pakamisa is also set for a move to Mozambican giants Liga Muculmana.Advertisement