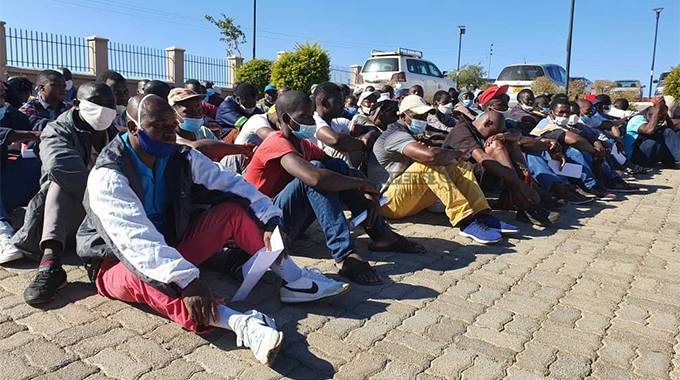 ECONOMIC Freedom Fighters (EFF) Zimbabwe has described as “foolish and u-African” the ongoing massive clampdown on undocumented Zimbabweans by the South African government.

The EFF also questioned why neighbouring country was targeting Zimbabweans only leaving out illegal immigrants from other countries.

South African authorities have embarked on a blitz which, has seen hundreds of Zimbabweans illegally entering that country being arrested and deported back to Zimbabwe.

The move also follows the recent controversial decision by the South African government not to renew permits for Zimbabwe Exemption Permit (ZEP) holders.

“EFF is for borderless Africa and it’s foolish for the South African government to target Zimbabweans who are Africans while leaving the Chinese and many other Europeans who are illegally living in the country,” he said.

“SA must be doing more to assist the Zimbabwe government and also understand that Zimbabwe is targeted by the West through sanctions because of having taken back its land,” Ndibali said in an interview with NewZimbabwe.com.

The opposition leader said under an EFF government, no African would be considered a foreigner in Zimbabwe.

“We have always said no African must ever be considered as a foreigner in any African soil. To us, these so-called borders are useless and meaningless because they were imposed on Africans by the white colonialists.”

The EFF leader also exonerated the Zimbabwe police and army personnel from bribery allegations levelled against them by South Africa’s military command-in-charge during the current blitz on Zimbabwean illegal migrants.

Senior South African soldiers in charge of the operation told the Minister of Home Affairs Aaron Motsoaledi Monday during a tour of the Beitbridge border post that Zimbabwean soldiers and police officers manning the border were taking bribes to allow Zimbabweans illegally crossing into that country free passage.

“Also the South African government must not disrespect Zimbabwe police and army on bribery allegations yet they have the most corrupt police in the world.

“Last year, we had a case of South Africa police officers who were arrested while assisting people smuggling goods into Zimbabwe,” added Ndibali.