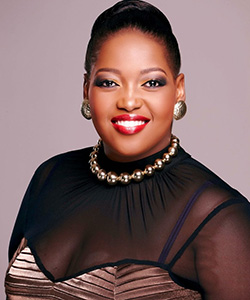 SOUTH Africa’s lauded gospel sensation and former member of Joyous celebration, Ntokozo Mbambo, has been announced as one of the guest musicians who will grace the stage at Free to Worship’s (FTW) fifth concert in October.
She is the first artist FTW have revealed for the celebration taking place in London in six weeks.
Mbambo will be joined on stage by revered music producer and husband Nqubeko Mbatha, FTW have said.
Mbambo, who joined the successful gospel group, Joyous Celebration, in 2001 made history when she became the youngest member of the award winning choir. She has become one of the most powerful female gospel musicians in the last decade.
Production Manager Tawanda Sarireni said the team are ecstatic that Ntokozo has agreed to be a part of their fifth show and will bring an overall presence to the evening.
“Ntokozo is a remarkable musician and such a breath of fresh air. I have had the pleasure of listening to her sing live in concert and I have no doubt that she will bless us tremendously,” said Sarireni.
Born in KwaZulu Natal, Ntokozo started in her church choir as a child.
Mbambo’s musical talent was recognised when she sang in a group called House of Judah in 1996.
At 15, she flourished when she became the youngest member of South Africa’s acclaimed gospel ensemble Joyous Celebration.
Mbambo released her debut album, Bambelela in 2001, which was followed by her live DVD and audio album, Keep on Believing in 2007. She also featured on Mthunzi Namba’s first album called Let it Rain.
Keep on Believing, produced by Nqubeko Mbatha, who later became her husband earned her a Metro FM award nomination for best gospel album in 2007 and three nominations at the 2008 Crown Gospel Music Awards.
Opening shows for renowned Gospel musicians like Yolanda Adams, Donnie McClurkin and Cece Winans, Mbambo  has also travelled abroad to perform her own music – visiting Kenya, Swaziland and the UK on a number of occasions.
Her most recent album, Filled, which was recorded at Lyric Theatre in Johannesburg, earned her numerous gongs, including several SAMA’s and Crown Gospel Awards. The album has also received double platinum certification from Universal music.
Following a successful couple of years, including their effervescent Thank You concert in Luton in 2015, the gospel ensemble has become a household name, captivating the hearts of fans with their unique and diverse gospel sounds. The choir have also been selling out concerts for four consecutive years.Advertisement

The sponsors for this year’s FTW event are Diaspora Funeral Cash Plan, in partnership with Zimnat Life, along with Zim Selectors.com, Rose of Sharon Healthcare and Exodus Law Associates.
The event scheduled for the 1st of October will take place at the Dominion Centre in the heart of Wood Green, London.
The Dominion Centre is a state of the art venue that seats up to 2000 people, and has hosted a variety of high profile party’s concerts and corporate events.

Tickets are being sold exclusively on the Free to Worship website www.freetoworship.co.uk
Ticket prices are £20 for adults and £8 for children. VIP tickets, which will give fans access to all the FTW musicians, including the guest artists are also available for £35.
The organisers have encouraged the public to buy tickets and not miss out on an event that promises to pull out all the stops, musically.
The group has said that the concert in October is part of their wider philanthropic vision, and proceeds will go towards building a sports field at John Lorry Primary School in Zimbabwe, as well as paying school fees for up to 40 children.
An EGEA Concerts production, Free to Worship is mentored and owned by Forward in Faith Ministries International and with the continued support of the organisation; the group has over the years united worship leaders, gospel singers and instrumentalists from many churches across the United Kingdom and the world.
For more information contact visit www.freetoworship.co.uk or contact 07464957463, 07946260963 or 07584662478.