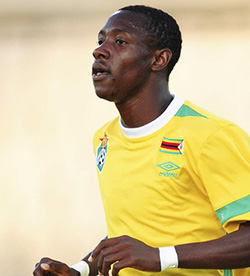 SOUTH African Premiership side Maritzburg United have tabled an offer for highly rated Hwange forward Evans Rusike after he made the grade following an assessment by the club’s technical team in the past two weeks.
Rusike is ear marked as a direct replacement for another Zimbabwean – Terrence Mandaza – whose has since left the club as he could not get his contract renewed.
The 23 year old Rusike also plays for the Warriors and was part of the squad that did duty at the COSAFA Cup.
He also scored for the Warriors in a 2-0 victory over Comoros in the first leg of the CHAN qualifier at Rufaro and has scored four goals for Hwange this season.
Hwange spokesperson Eltah Sanangura confirmed the South African club has tabled an offer for the player.
“We acknowledge receipt of the offer for the services of Evans Rusike by Maritzburg United Football Club from Hwange Football Club, following the soccer trials Evans attended in South Africa recently.
“However, the Club is in the process of responding to Maritzburg United Football Club in this regard.  Hwange Football Club will advise on its position once the negotiations have been finalized,” said Sanangura without disclosing details of the offer tabled by Maritzburg United.
Should the two parties agree, Rusike will link up with fellow Zimbabwean Khumbulani Banda who is already on also Maritzburg’s books.Advertisement