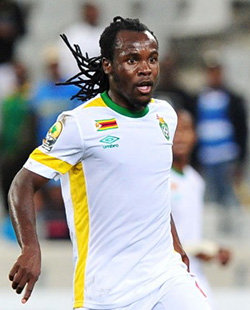 WARRIORS midfielder Peter ‘Rio’ Moyo has just a few hours to find a club back in Zimbabwe after he was unceremoniously booted out of South African club Mpumalanga Black Aces on Thursday.
The Zimbabwe mid-season transfer window closes at midnight on July 31 and Highlanders, his former team, have not made any moves to sign him.
Instead, Highlanders have signed another Warriors player, Pascal Manhanga, who starred for Zimbabwe at the Chan tournament in January.
Moyo had reportedly signed for R250 000, but Aces co-chairman, Mario Morfou, has now confirmed that the club has decided to release the player.
“Yes, it’s true that we have released Moyo. He was not in the coach’s plans. We have too many midfielders in the team, so we decided to release him,” Morfou told the media.
The latest developments would derail Moyo’s game as he was on the rise after the Chan tournament.
But he refused to sign a long term deal at Bosso, only penning a six-month contract which ended on June 30 so that he could move to Aces.
Highlanders were not sure of Moyo’s plans, and decided to move for Manhanga to beef up their midfield ahead of this weekend’s league match against How Mine at Barbourfields.
The Bulawayo giants have also re-signed Njabulo Ncube from FC Platinum, Webster Chingodza from former PSL side Tripple B and Tapiwa Dephistara from Triangle.
Meanwhile, Moyo’s failure to make the grade contrasts with several of his Chan teammates, who have been snapped up by Absa Premiership clubs.
SuperSport United have signed goalkeeper George Chigova; Ajax Cape Town have captured Milton Ncube from Highlanders; Eric Chipeta has gone to Chippa United from Hwange; Kudakwashe Mahachi to champions Mamelodi Sundowns and Chan captain Partson Jaure to the University of Pretoria from Dynamos
The other signing from Zimbabwe in recent weeks include Khumbulani Banda, who has moved to Maritzburg United from Highlanders.Advertisement