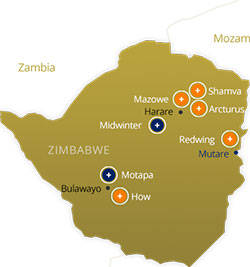 THE founder of Zimbabwe’s largest gold-mining group, Metallon Corporation wants to start platinum operations in the country that has the world’s largest reserves of the metal after South Africa.
“We clearly have aspirations to be in the platinum business, but it will be here in Zimbabwe, we wouldn’t want to get involved in South Africa,” Metallon Corp. founder and Chief Executive Officer Mzi Khumalo said in an interview in Harare last week.
Impala Platinum Holdings Ltd. (IMP), Aquarius Platinum Ltd. and Anglo American Platinum Ltd. (AMS), the world’s biggest producer of the metal, are the sole miners of the commodity in the country.
Russia and Zimbabwe will jointly mine platinum in the African country’s Darwendale district, creating what will be its biggest facility for the metal, the nations said last month.
“There are no firm dates yet,” and the company has yet to engage with the government about obtaining land, Khumalo said. “If we get a platinum ground that has not been drilled, then out of that will come out a bankable feasible study.”
Metallon has four gold-mining operations, a development asset and exploration licenses in Zimbabwe. It forecasts 100,000 ounces bullion output this year.
The company secured four exploration properties in Democratic Republic of Congo and is obtaining rights near Tanzania’s Lake Victoria gold fields, it said.
“At the moment, it could be a good aspiration,” said Khumalo, who is from South Africa and founded Metallon on 2001.
“People like me who are in the resource business, of necessity they have to be optimistic. It’s a nature of the beast, you have to be optimistic, but at the same time must be able to balance your optimism with actual exploration”
Khumalo, who bought the Zimbabwe gold-mining assets of Lonmin Plc to build up Metallon, is the former chairman of JCI Ltd., which was South Africa’s first black-owned mining company before its assets were sold.
He served time as a political prisoner during apartheid with Nelson Mandela on Robben Island off the coast of Cape Town.Advertisement