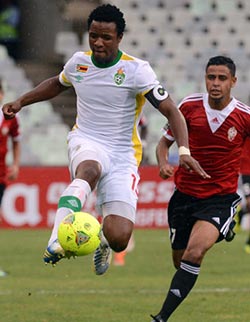 SOUTH African premiership outfit, SuperSport United, have reportedly expressed an interest in Zimbabwe defender and captain, Partson Jaure.
Jaure has been outstanding in the Warriors defence, inspiring Zimbabwe to a semi-final spot in Chan. Their defence has been the most stubborn one in the competition so far.
The Dynamos defender could now remain in Pretoria when the tournament finishes on February.
Dynamos chairman Ken Mubaiwa told Goal.com that it was not the first time that United have been interested in the player.
“We know there are other teams who have also enquired about him, but the interest from SuperSport United is the main one as they have seen the player before, though nothing worked out,” he said.
“But I think after seeing him during this tournament in South Africa they have increased their desire to sign him. We will wait to hear from them and take it from there.”
Jaure has played for two seasons with the Harare giants winning two league titles and also played in Africa where the team didn’t do very well.
Apart from SuperSport United last season, there was also interest from Ajax Cape Town but nothing transpired.
With Chan giving Jaure a window to showcase his talent, his hopes of gaining a transfer to the South African PSL could become a reality this time.
Advertisement