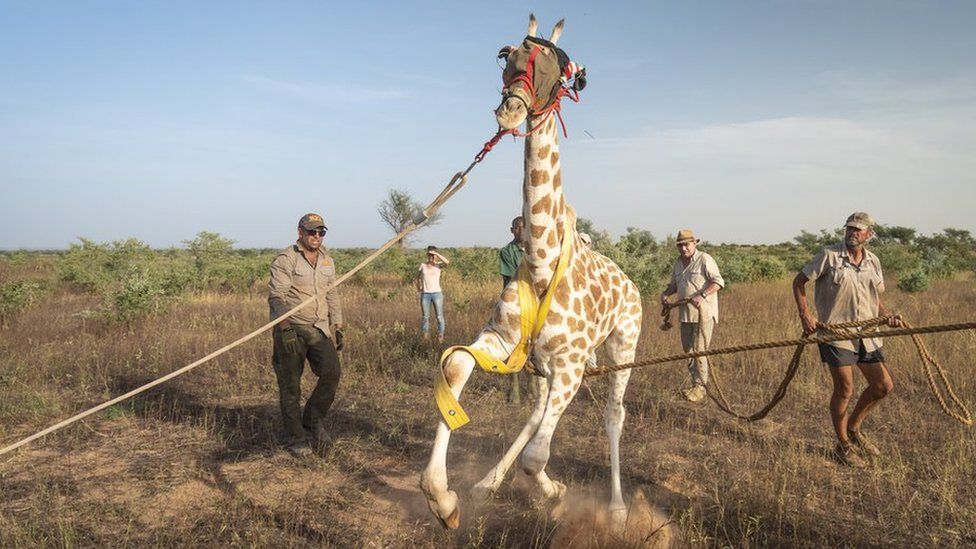 Illegal hunting, climate change and habitat loss have all contributed to the population’s decline.

An ambitious conservation initiative has now re-introduced eight giraffes into the reserve, in the first conservation effort of its kind for the West African subspecies.

Under the initiative, spearheaded by the Nigerien authorities, the eight giraffes were captured in the country’s Giraffe Zone, a government-defined region where giraffes and humans co-exist. It is approximately 60 km (37 miles) south-east of the capital, Niamey.

Until this move, the world’s last West African giraffes had only been found in and near this Giraffe Zone.

There, West African giraffes share their habitat with local communities, and compete with them for space and natural resources.

The animals face a number of threats, including human population growth, hunting and agricultural encroachment.

Giraffes have now started to migrate out of the Giraffe Zone as a result of the growing population of both humans and giraffes themselves.

As a result, the animals have come into conflict with humans who are not used to their presence, and also stray into restive areas on the border with Mali.

After the eight giraffes were captured, they were secured with ropes and herded into trailers.

They were then put in a holding pen for more than three weeks to prepare them for the long journey to come.

The population of giraffes has dwindled across Africa over the past 30 years, according to the Giraffe Conservation Foundation (GCF). In West Africa, the regional subspecies was once common in many countries, including Nigeria, Mali, Mauritania and Senegal, but now only exists in Niger.

In the mid-1990s there were only 49 West African giraffes left in the wild. As a result, the subspecies was listed as endangered on the International Union for Conservation of Nature’s (IUCN) Red List of Threatened Species in 2008.

Efforts by the government of Niger in collaboration with local and international partners have led to a resurgence of the West African giraffe.

The population has now increased to 600 and last month, the subspecies was downgraded to vulnerable by the IUCN.

Since 2005, conservation efforts in Niger have also been bolstered by the GCF and the Sahara Conservation Fund, which have worked alongside the government.

After the eight giraffes were captured, they were then transported more than 800 km by land to their new home in central Niger.

Conservationists believe that the reintroduction of the eight giraffes is a key step in developing Gadabedji as a flagship wildlife reserve in Niger.

They also hope it will accelerate the resurgence of the West African giraffe even further.