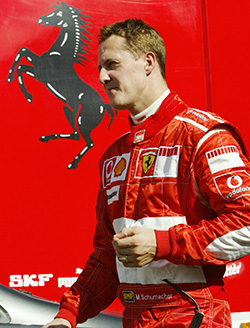 SEVEN-TIME Formula One world champion Michael Schumacher continues to make progress in recovering from a severe head injury, nearly a year-and-half after a skiing accident, according to his manager.
“We’re glad to be able to continue to say that he is making progress, as I always say, given the severity of his head injuries,” said his manager Sabine Kehm at a sponsor’s event.
But Kehm also reiterated 46-year-old Schumacher’s recovery will be a lengthy process following the accident in the French Alps in December 2013 which left him in a coma in Grenoble hospital for 189 days.
Last June, Kehm announced Schumacher was out of a coma.
Schumacher has been treated at his Swiss home near Lake Geneva since September last year and has yet to make a public appearance since the accident.
Advertisement