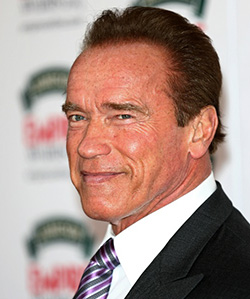 THE Terminator is campaigning to save African elephants from poachers.
Arnold Schwarzenegger is featured in a new video in which he brandishes a tusk and appeals for an end to the slaughter of elephants. The video, which was released Friday, then shows the tusk being wired with explosives and blown up.
“Let’s get rid of the demand once and for all,” says the action star of the “Terminator” series, who sports sunglasses and is seen standing in front of a military vehicle.
The video was made on behalf of the Wildlife Conservation Society, a group based at New York’s Bronx Zoo.
The Los Angeles Zoo donated the tusk that was blown up in the video, according to the conservation group. It said eight countries, including China, the United States and several African countries, have publicly destroyed more than 42 tons of illegal ivory this year.
Poachers have annually killed tens of thousands of elephants in recent years to meet rising demand for ivory, particularly in China. In September, the United States and China agreed to work toward nearly complete bans on the ivory trade.Advertisement