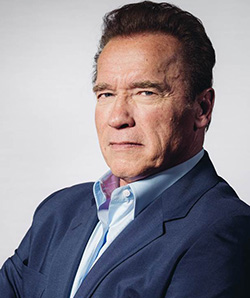 IT’S a rare case when a film’s most iconic line practically preordains its franchise. As promised, The Terminator, and the man who originated the steely machine — Arnold Schwarzenegger — are back for another go-around in “Terminator: Genisys.”
With four films (two great, two questionable), over $1 billion in box office receipts, and a jumbled time-travel mythology, “Terminator: Genisys” is taking the elements of James Cameron’s 1984 original and twisting them a bit to create an entirely new timeline. Two more “Terminators” are planned.
Getting a jump on a summer that’s chock full of franchise fare, including continuations of “The Avengers” and “Jurassic Park,” Paramount Pictures recently showcased a few minutes of action-packed footage from “Terminator: Genisys.”
Key cast members, including Schwarzenegger, were also made available — all to help generate early buzz for what the studio hopes will be a bona fide summer blockbuster.
Paramount is on a major push to restore its once robust production prowess. Although its franchises, including “Transformers” and “Mission: Impossible,” are successful, the studio has lagged behind its Hollywood counterparts in recent years.
Seated on a massive couch next to his three new co-stars, Schwarzenegger seemed glad to be back.
“I watched all the movies again to really get up to speed with the character,” he said.
The film opens in a familiar spot — 2029, when the war against the all-powerful artificial intelligence system Skynet is raging.
Resistance leader John Connor (Jason Clarke) once again sends soldier Kyle Reese (Jai Courtney) back to 1984 to save his mother, Sarah Connor (Emilia Clarke), from being killed by a Terminator. But this time, things are different. Sarah has her own protector: An aged Terminator who has raised her since childhood.
“We’re really harking back to James Cameron’s original characters that were in one and two and we’re taking it from there,” said Emilia Clarke.
The project on the whole is an intensely hush-hush endeavour, but director Alan Taylor (“Thor: The Dark World”) has said many times that, at its heart, the film is about man’s relationship to technology in the modern age.
In 2015, that idea has evolved from when James Cameron first introduced us to the T-800 31 years ago.Advertisement

“In ’84, this was total science fiction — when machines take over. And now, we’re there,” said Schwarzenegger.
“That’s the wild thing about it. When we did this movie, it was kind of almost reality, unlike in 1984 where we thought, ‘oh well wouldn’t this be a funny world.’ Things have changed.”
Jason Clarke jumped in to agree.
“Good science fiction is relatable. It mirrors what we’re going through and Cameron set up wonderful, iconic metaphors and characters for us to play with,” he said. “Judgment Day still exists. It just might not be nuclear.”
While there are many Terminator die-hards out there waiting, as Courtney says, “to criticize this thing,” when it finally hits theatres on July 1, he believes they’ll be pleasantly surprised.
“The beauty of what we’ve done is not only stayed loyal to the original source material but opened it up to a whole new generation,” said Courtney. “I think we’ll succeed in bringing them in.”