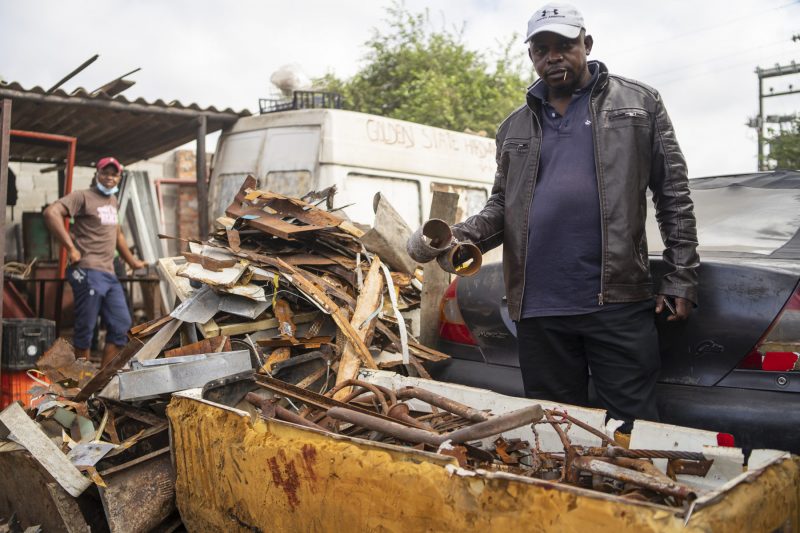 Amid economic crisis, collecting and selling scrap metal has provided an income and lifeline for many Zimbabweans, such as Bulawayo resident Maxwell Ruzive, and led to an unintended circular economy
Spread This News

IN THE city of Bulawayo, a struggling steel industry has in the past few years found relief in small-scale producers. These producers have contributed to a rush for scrap metal that has brought problems of its own, including a spike in vandalism and metal theft.

Steel manufacturing companies once thrived in Zimbabwe’s second city, which used to be celebrated as the nation’s industrial hub.

But over the past decade, hundreds of companies have shut down in Bulawayo, citing high energy costs and water shortages, reducing the city’s once billowing furnaces to a silent wasteland of derelict structures.

Pledges by the government to resuscitate industry have done little to help.

In recent years, small foundries and steel producers, including two owned by Chinese companies – Huamin Steel and Naisonale Investments – have set up in Kelvin West, an industrial area of the city where bargain hunters can source anything from car parts to coffins to a lunch consisting of cow heels.

Naisonale Investments, which employs about 150 workers, recycles scrap to supply steel products such as beams to the domestic construction sector. At peak output, the company produces 30 to 40 tonnes of steel per day, according to Pritchard Murayirwa, the general manager.

A tour of the company’s premises revealed a busy production cycle running 24 hours per day, in which scrap metal is sorted and prepared for the furnaces, ready to make new steel products. Steel is considered by the government to be a critical industry, so companies such as Naisonale have been exempted from the planned power outages which have crippled other industries in Zimbabwe.

Their success has, however, caused headaches for other sectors in Bulawayo and the wider nation.

The growth in operations at steel companies such as Huamin and Nasionale has created strong demand for scrap steel, which may have inadvertently contributed to a rise in vandalism, including of state-owned enterprises such as the struggling National Railways of Zimbabwe (NRZ).

Theft cost the railways more than US$3.5 million last year, according to Martin Banda, a company spokesperson.

“The railways continue to lose infrastructure to vandalism and, from what we gather, the vandalised steel is sold to scrap yards where it is recycled and turned into other steel products,” Banda told China Dialogue.

It’s not only steel items that are being sought in this new rush for scrap. “Brass bearings in our trains are also being targeted because we are told brass handles are always in demand with funeral parlours for coffin handles,” Banda said.

There is a certain irony in the railway system falling victim to vandalism, as Judith Ncube, Bulawayo’s minister of state for provincial affairs, recently pointed out. “NRZ locomotives once transported key raw materials for the foundry sector,” she told a meeting of the Zimbabwe Institute of Foundries (ZIF) last month.

At the Naisonale Investments scrap heap, parts from haulage trucks and railways, such as tracks and train components, can be found, before they are transferred to the furnaces and cast into new steel products.

According to its manager, Murayirwa, a tonne of scrap metal sells for US$150, but dealers can get up to US$300 depending on the day’s market price.

“We get scrap from big companies, some of whom have abandoned their operations, but also from individuals who have scrap to sell. No one can say we are promoting vandalism,” said Murayirwa.

One scrap metal dealer located close to Naisonale Investments told China Dialogue he sells most of his scrap to the Chinese companies in Bulawayo.

Some also goes to buyers in the small town of Kwekwe, a little over 200km southeast of Bulawayo and home to the perennially troubled state works, the Zimbabwe Iron and Steel Company, or Ziscosteel. Kwekwe has in recent years seen the establishment of several small foundries amid continuing efforts by the government to revive the steel sector.

In a country where, according to international aid agencies, millions survive on less than a dollar a day, scrap metal collection has emerged as a potential source of income. But while this presents an economic lifeline for many, the prices offered for scrap by new companies in the domestic steel sector appear to have provided an incentive for vandalism and theft.

Local industry leaders have also complained about the government issuing permits to companies that allow them to export scrap metal to neighbouring countries, and circumvent an official but loosely enforced ban.

Illegal exports by unlicensed dealers also present a significant problem. These leakages, sanctioned or otherwise, deprive the domestic industry of much-needed materials, and may have caused Zimbabwe losses as high as US$5 billion over the past two decades, according to the country’s mining minister.

The fluctuating availability of scrap metal presents challenges that exports only aggravate, according to Itai Zaba, president of the ZIF.

He is clear about the action needed: “We want a [total] ban on exports, to supply local demand.”

Like Minister Judith Ncube, Zaba also notes the particular difficulties faced by the railway industry, whose parts were made in foundries, which has been “cannibalised” by scrap theft.

According to local media reports, vandalism of everything from transport parts to power and telephone infrastructure has likely cost the country many millions of dollars, amid a host of economic and political challenges over the past two decades.

Zimbabwe’s downward economic spiral has led to an unintended circular economy where anything from plastic bottles to soda cans now provide a source of income. Amid the uncertainty about supply of steel and related alloys, small-scale metal workers have found ways to create a living for themselves, in a country where millions are jobless.

Lowani Ncube, who makes aluminum pots at one of the thriving informal backyard workshops in Bulawayo’s Renkini area, says he buys and melts scrap from car breakers.

“The Chinese businesses who operate in the city deal with heavy metal that requires a lot of electricity [to melt],” he told China Dialogue. “For small metal workers like us, we melt our scrap using coal.”

While larger businesses such as the city’s Chinese-owned operators work with larger items, backyard workers such as Ncube largely deal in smaller goods. “I use soda cans which I buy from collectors and melt them to make three-legged pots,” he told China Dialogue from his workshop. Across the city, local residents can be found digging through commercial waste looking for discarded soda cans.

Just around the corner from Ncube’s workshop, 27-year-old Kumbirai Siziba can be found working on tough steel products such as pick-axe heads. His methods are more traditional: using blacksmith muscle, and with the assistance of a group of other workers, he melts iron scrap using coke, then bangs it into shape to make a variety of products.

“We buy the scrap from people who go around collecting it for resale, while we get the coke collected from a Zimbabwe Electricity Supply Authority [the country’s power utility] dump site,” Siziba told China Dialogue. His workshop is a far cry from the industrial-scale output of other steelmakers in the city, but is still a part of a growing trade attracting ever increasing numbers of the city’s residents.

Reviving a steel sector in decline

Zimbabwe used to be one of southern Africa’s biggest steel producers until Ziscosteel shut down its production more than a decade ago. At its peak, Ziscosteel employed more than 5,000 workers.

Although the company has long been beset by instability and management issues, its absence costs the Zimbabwean economy.

Last year, Sekai Nzenza, the country’s minister of industry, complained that, following the closure of Ziscosteel plants and the drop in domestic production, steel imports to support local industry were costing the nation more than US$1 billion a year.

The government has made successive attempts to resuscitate the majority state-owned company but with limited success. The latest attempt to revive the steelworks was in April last year when the company’s board announced it was looking for new investors.

Aside from Ziscosteel, production in Zimbabwe does continue, but the steel industry is a shadow of its former self. According to Dosman Mangisi, chief operating officer of the ZIF, there are now a total of 55 foundries operating in the country, of varying size and capacity, which process over 340,000 tonnes of scrap annually.

“We are however operating below capacity, at 40%, because of operational challenges that include high rentals and shortage of raw materials,” Mangisi said, adding that the sector contributes more than US$1.5 billion to the national economy annually.

Elsewhere, several domestic and international companies have stepped in to revive large-scale steel-making in the country. Tsingshan Holding Group, one of China’s largest corporations and a major global producer of stainless steel, is investing heavily in iron ore and coke production in Zimbabwe, as well as a steel plant that alone is worth more than US$1 billion.

It will become the country’s largest steel-making enterprise and should create hundreds of jobs.

No timeline has been offered as to when Tsingshan’s new operations will start, but according to statements issued by company officials in March last year, the plant will have capacity to produce 1.2 million tonnes of steel under its subsidiary Zhejiang Dinson Holdings, which already runs a ferrochrome plant in Zimbabwe.

ZIF could not provide the number of Chinese foundries operating both in the city of Bulawayo and across the country, but Mangisi told China Dialogue they are in the process of preparing an inventory that will detail the foreign investors involved in the sector, including the Chinese entities.

The impacts of these new investments in large-scale steel-making in Zimbabwe will become clearer in time, but it may bring a boost to a currently moribund sector.

A return to more reliable steel output and its potential associated economic benefits, as well as the creation of jobs in the industry, could provide a stability that may steady the rush for scrap metals.

However, with an increasing number of people making their livelihood in scrap collection, the situation will also require careful management.