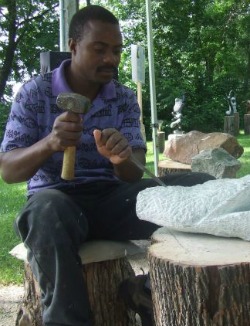 SIMON Chidharara communicates with stones; the end result is a remarkable inventory of Shona sculptures, currently displayed at the waterfront in Beaconsfield’s Centennial Park, in Canada.
“I have a connection with my sculptures; the different aspects of life, like animals and how they contribute to us,” said Chidharara, ZimArt’s artist in-residence for 2013 who’ll be in Canada until late September. “Also, every aspect of human life: love, happiness, and sorrow.”
“My inspiration comes from the stones I work with. I communicate with the stone. There’s always something hidden within the stone that I try to find out,” he added.
Chidharara’s work is being featured as part of the annual exhibition, ‘Shona D’Afrique IX,’ which includes a collection of more than 150 hand-carved stone sculptures produced by 30 Zimbabwean artists. The free exhibition began last Saturday and will run until July 21.
Born in the mountainous region of Nyanga in 1980, Chidharara’s upbringing was not unlike other Zimbabweans during the early years after the country’s independence.
The artist described his early childhood as “very challenging growing up in a less privileged family.”
“My mother struggled to get me into school,” said Chidharara, who would walk 10 kilometres to school, every day. “She worked all the time. It has definitely been a tough journey.”
But at the age of 11, his brother Kenneth, also a sculptor represented in Canada by ZimArt, put Chidharara to work as his apprentice.
“He saw the talent in me. He groomed me to become what I am today,” said the sculptor.
After completing secondary education, he decided to pursue his passion for carving full-time, a decision that would ultimately pay dividends.
Fran Fearnley, ZimArt’s curator and founder, was in Zimbabwe when she discovered the artist.
“I could see a lot of creativity in his work,” said Fearnley.
“I found it very spiritual and connected. It’s so wonderful to encourage him. Now he’s beginning to experiment more and more with the stone, and reading it in such a way that he doesn’t need to conquer it as he once did.”
And while Chidharara has come a long way since that chance meeting 13 years ago, producing Shona sculptures that have been bought by galleries in Canada, Germany, Holland, South Africa, United Kingdom and the United States, he’ll always remember where it all started – the tiny town of Nyanga, home to an enduring tradition of Shona art.Advertisement