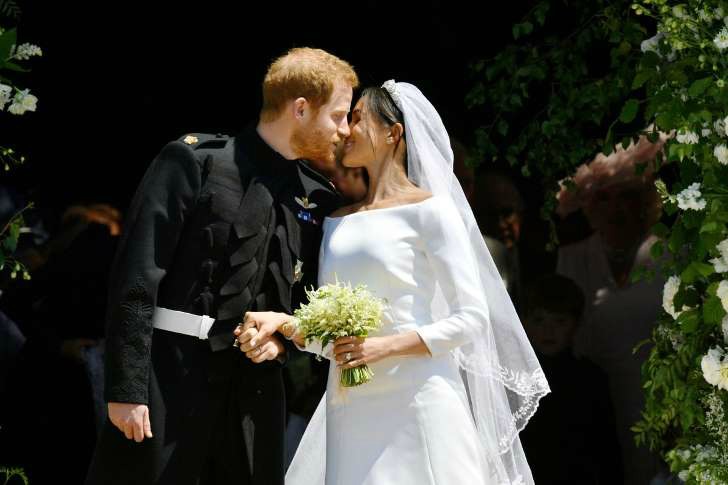 Prince Harry and Meghan Markle kissed outside church today after emerging from their wedding as man and wife.

The couple shared their touching ‘balcony moment’ after getting married in a beautiful ceremony at St George’s Chapel, in Windsor.

The newlyweds sealed their vows with a smooch as the cheering public waited outside for the happy couple.

Church bells rang as the beaming bride and her new husband walked hand in hand.

Gently tilting her head upwards, Meghan puckered up and smiled as Prince Harry planted a loving kiss on her lips.

During the service, the emotional groom told Meghan “you look amazing, I missed you” as he saw her in her wedding dress for the first time.

The groom, 33, smiled as his bride walked towards him.

Meghan arrived accompanied by two pageboys who held up her train as she walked the chapel’s steps alone.

She wore a simple, long-sleeved white dress, with a veil covering her face.

The royal bride entered the chapel by herself before being met by the Prince of Wales.

Meghan arrived at church for her marriage to Prince Harry wearing a stunning gown made by British designer Claire Waight Keller.

The bride gave millions around the world the first full look at her spectacular dress as she emerged from a car outside the chapel just before midday.

She smiled and waved to fans who had gathered to celebrate her wedding before going up the steps to the church.

Her extensive veil, decorated with flowers representing all 53 countries of the Commonwealth, was carried by two of her pageboys.

Meghan decided to walk the first part of the aisle solo accompanied by her six bridesmaids and page boys after her father Thomas Markle pulled out of the ceremony at the last minute.

Meghan spent her last night as an unmarried woman with her mum Doria Ragland at Cliveden House, roughly 10 miles from Windsor Castle.

Prince Harry stayed 15 miles away at Coworth Park with William.

Harry and Meghan announced their engagement to a flurry of excitement in November 2017, just days after Harry had popped the question over roast chicken.

In 2011, William and Kate sealed their love – and made the nation’s day – with two kisses on the balcony of Buckingham Palace.

Ever since the wedding of Princess Victoria in 1858, it has been customary for royal brides and grooms to acknowledge the crowds below.

The image of kissing newlyweds on the balcony has become so iconic, it is perhaps surprising to note that it has only happened on three occasions.

Prince Charles and Lady Diana Spencer were the first to kiss for the crowds, followed by Prince Andrew and Sarah Ferguson – who jokingly pretended they did not hear the request, before obliging.

On William and Kate’s wedding day, the couple kissed twice as the crowds cheered wildly.

The balcony tradition has now extended beyond Buckingham Palace, with Pippa Middleton and husband James Matthew puckering up outside St Mark’s Church, in London, on their special day last year.