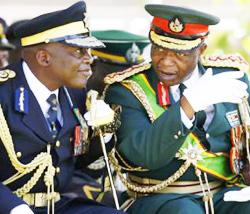 IT MUST be clear by now to the discerning mind that our service chiefs have gotten a bad rap. The discerning mind will interrogate the long repeated mantra that Zimbabwe needs “security sector reform” as nothing more than an attempt to weaken the very essence of our nationhood.
To say that those who gave so much to usher in the nation of Zimbabwe are stumbling blocks to the progress of this nation is nothing short of practicing selective amnesia at best and gross self immolation at worst.
No nation worth its salt assaults its security sector with a view to decimating it and then expects to enjoy peace. It just is not possible. The United States for all the human rights abuses carried out by its forces in Iraq and Afghanistan has never called for the reform of these services. The criminal activities of US service men and women at the infamous Abu Ghraib prison is a case in point.
What of the pledge made by the then Democratic candidate for the US White House Sen Barack Obama in 2008, who in his quest for the for the presidency stated that he was going to close the Guantanamo detention facility as soon as he became president?
Well he became president and the detention facility is still open even as he now enters the first year of his second in office. It is common knowledge that the US is not a signatory to the ICC and therefore no US citizen can be taken to the Hague to be tried for whatever evil they commit around the world.
Their mantra is that US courts and systems will try US personnel, regardless of what they have done. Now why on earth should we Zimbabweans heed the call by foreign funded NGO’s to “reform” our security sector, when we know very well that these calls are a smokescreen to decimate one of the most professional and efficient security service in the region if not the entire continent of Africa?
Where would the DRC be today if our gallant forces had not intervened to stop the marauding Banyamulenge rebels who were about to take Kinshasa before the ZDF landed at Kinshasa Airport, secured it before engaging and driving the rebels back? What would have happened in Mozambique if once again the ZDF had not stepped in and prevented the MNR rebels from establishing a foothold in Gorongosa and effectively splitting Mozambique in half?
What of the sheer precision and detailed intelligence that nabbed Simon Mann and his band of mercenaries from creating mayhem and bloodshed in Equatorial Guinea when they were arrested at Harare International Airport? Fellow Zimbabweans, all these incidents that I am alluding to are not figments of my imagination.Advertisement

These are operations carried out successfully under the command of our much maligned security chiefs that history will record altered for the good the destiny of nations on the continent of Africa.
I ask those who would try and trash the history of the ZDF, what of the recent humiliation of the SANDF in the Central Africa Republic where South African forces were made to beat a hasty retreat by boy scouts masquerading as soldiers?
South Africa, the darling of the world and supposedly the poster boy of what Africa should be, and whose forces we are told have all the sophisticated weaponry at their disposal.
This is what makes the ZDF’s intervention in DRC and Mozambique all the more remarkable and something that should engender a great sense of pride. Can we not see through the smokescreen of the “security sector reform” mantra and unmask the move by our detractors to weaken and indeed render the ZDF of no use so that what our detractors have failed to do through measures foul they would do with military intervention?
Is the strength, professionalism and on the ball intelligence of our security sector not the reason why our detractors did not attempt military intervention even though it is quite clear it was contemplated? Not that I am saying we had the military might to hold them off, no, but clearly they knew and know that Zimbabwe is not Somalia or the DRC.

In saying all this, I do not hold the view that our security sector have not made mistakes in the carrying out of their duties, but what I am calling for is fairness and balance in analysis.
Why is it that the western world with all its so called human rights organisations have been conspicuous by their silence on the massacre which occurred in Marikana, South Africa? What if Marikana had been in Mhangura? We would never have heard the end of it and probably been hauled before the UN. But the ZRP, even in the face of gross provocation, have used baton sticks and not bullets.
Yes there may have been and may be overzealous police officers who bring disrepute to the ZRP, but let us give the ZRP their due, they have a done a marvelous job in maintaining law and order and putting criminals behind bars in this nation.
Last year, we witnessed the attempted resurrection of the MNR once again in Mozambique with a reported 1,000 armed men gathered at Gorongosa. The helplessness of the Mozambique armed forces in the face of this potentially devastating scenario has been alarming.
Then in the same year, we saw another group of armed rebels, the M23, overrun the key town of Goma in eastern DRC with the helpless UN peacekeepers in tatters as they fled the oncoming rebels.
What we should be asking ourselves is why Gorongosa cannot be Gandanzara, and Goma cannot be Gokwe? Our professional and patriotic security sector!
Marikana was not Mhangura, Gorongosa was not Gandanzara and Goma was not Gokwe because we have security forces that have kept the peace, stability, integrity and well being of the nation as the core of their raison d’être. For that, we owe them our support and accolades not brickbats and derision.
We would do well to take in account the recent revelation that the CIA poured millions of dollars into the Karzai government in Afghanistan to gain influence and dictate certain outcomes. This is a very worrying revelation and makes a complete mockery of the calls by these self same nations for accountability, rule of law, and transparency.
It is the often illegal, covert, and destabilising support of these western nations to the mannequin recipients of their “aid” masquerading as NGO’s, that needs urgent reform.
If the US can pump such massive amounts of tax payers money with no accountability whatsoever (reports indicate money being handed over the Afghan officials stuffed in plastic carrier bags) to prop up a government that was imposed on the people of Afghanistan through what has been widely regarded as the most blatantly fraudulent electoral process ever conducted under the auspices of the UN, the question must be asked of the authenticity of many NGOs worldwide including some within our midst.
Take the so called Center for Research and Development whose major claim to fame has been to make outrageous claims about the diamond mining processes in Marange. What development has this organisation carried out since its formation? Does anyone know?
What of the Zimbabwe Peace Project? Where have they been involved in peace building in the nation? What of another group out of Bulawayo called The Solidarity Peace Trust? Are they known for any peace initiatives in Mutoko? Murambinda?
The fact of the matter is that if these NGO’s come under any serious scrutiny, it will be obvious beyond any shadow of reasonable doubt that their operations bear no semblance to what they are purportedly supposed to do. A close examination of their financial support, however, will show that they are the recipients of an inordinate amount of foreign funding, which often times like the Afghan scenario is unaccounted for.
This is what needs reform because of the potential destabilising effect this can have on national.
And so let’s be rational in the manner in which we look at our national security sector and those that give leadership to it. General Constantine Chiwenga, Commissioner General Augustine Chihuri, Air Vice Marshall Perence Shiri, Commissioner General Paradzai Zimondi, Major General (retired) Happyton Bonyongwe, Lt General Phillip V. Sibanda are not asking for veneration or adulation but they and others, the likes of Major General (retired) G. Mashingaidze, Brigadier General (retired) B. Mabenge, Cde Dumiso Dabengwa, Lt Gen (retired) Mike Nyambuya and indeed a host of others (whose bravery and exploits in giving leadership during the war of liberation have never been fully reported and appreciated to the broad Zimbabwean populace) need our collective recognition and respect not the vitriol that is often spewed at them.
Bishop Trevor E. C. Manhanga is the Presiding Bishop of the Pentecostal Assemblies of Zimbabwe. He writes in his personal capacity