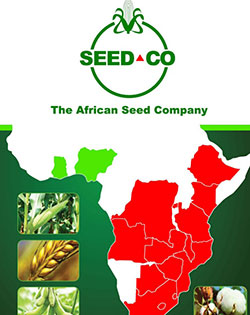 SEED maker SeedCo has recorded an 11 percent decline in revenue to $95 million for the full-year to March 31 due to maize seed product shortages.
Demand for seed shifted to the medium to short season varieties as farmers anticipated poor rains, and input programmes across the region, which normally boost its sales, were subdued.
Other incomes however increased due to exchange gains and non-seed sales with the company recording an after tax profit growth of 27 percent to $15 million.
“Operating costs at $31,2 million were contained at 11 percent below prior year, with major emphasis being placed on increased investment in research and development, expansion of the distribution network in the new markets and brand building activities in all markets with launch of new packaging,” the group said in a statement accompanying its results on Friday.
Credit sales were lower as the group tightened its credit risk management which significantly reduced impairments.
Financial charges were down 56 percent due to aggressive debt collection and injection of new capital from its technical partner.
Out of the $44 million trade receivables, various governments across the region owed the group $20 million of which $7,8 million was collected after year end. The group also collected $10,6 million from retail debtors after year end.
The group’s non-current assets went up by 81 percent due to the inclusion of treasury bills worth $23,7 million issued by the Zimbabwe government, bringing total assets to $186,9 million while liabilities are at $39 million.
SeedCo declared a dividend of one cent per share to be paid out on July 29.Advertisement