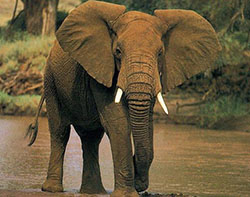 HARARE: Zimbabwe’s wildlife agency said Thursday it has sold 35 elephants to China to ease overpopulation and raise funds for conservation, amid criticism from animal welfare activists that such sales are unethical.
This once-prosperous country’s economy has fallen apart, and Zimbabwe’s government has said it needs to sell wildlife to support its people and conservation efforts. The government also has sought to sell its ivory stockpile for millions of dollars.
The Zimbabwe Parks and Wildlife Management Authority did not say how much China paid for the 35 elephants but said it was “turning to friendly countries to extract value out of our wildlife.”
This is the first time Zimbabwe has confirmed the Dec. 23 sale since activists announced a plane was carrying the animals to China.
The wildlife agency didn’t say whether the elephants were adults, which has been a concern for some conservation groups.
“Why is it done clandestinely and then announced two weeks later? Because we know that at times calves have been taken away from their mothers, conditions have been atrocious and the money, no one really knows how it is used,” said Johnny Rodrigues, whose Zimbabwe Conservation Taskforce has been vocal about elephant sales to China.
A similar outcry followed similar sales in 2015.
The statement by Zimbabwe’s wildlife agency said its conservation efforts have been affected by restrictions on selling the country’s ivory stockpile and on trophy hunting of certain species.
In 2014, the United States banned the import of sport-hunted elephant trophies from Zimbabwe, citing a lack of transparency in the use of conservation funds generated by their export.
Zimbabwe’s wildlife agency has said this wildlife-rich southern African country has 36,000-plus more elephants than it can support.
The 35 elephants were captured from Hwange National Park and flown to China’s Shanghai Exhibition Park, Beijing Wildlife Park and Hangzhou Wildlife Park, the agency said. It said it followed international regulations in the sale, adding that it previously sold other animals to Europe and the United States.Advertisement