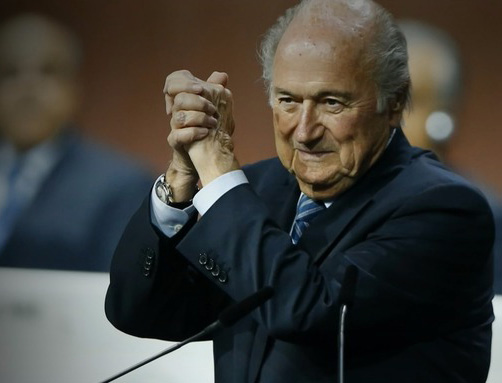 WHEN FIFA announced a news conference would be held in Zurich on Tuesday afternoon, few people seriously thought that Sepp Blatter was about to step down as FIFA president.
The 79-year-old was still seemingly basking in his re-election triumph as he repeatedly swerved widespread calls for him to move aside after a hugely damaging week for FIFA.
Earlier on Tuesday, it emerged that US prosecutors had reason to believe Jerome Valcke – Blatter’s top lieutenant – made $10 million in bank transactions that were central to the FBI’s bribery investigation. FIFA later issued a statement denying the allegations.
Fourteen FIFA officials and corporate executives were charged by the US Department of Justice last week over claims they were part of a scheme that saw more than $150 million (£98.5m) of bribes change hands.
A separate criminal investigation from Swiss authorities was launched concerning the awarding of the 2018 and 2022 World Cups to Russia and Qatar respectively.
As further details of alleged wrongdoing leaked out, calls intensified for Blatter to step down.
Instead, Blatter – knowing he had the support of the majority of FIFA nations – insisted the presidential elections would run as scheduled, with the contest a showdown between the Swiss incumbent and Jordan’s Prince Ali bin Al Hussein.
Blatter won the first round of voting comfortably, prompting his rival to withdraw, as he secured a fifth term at FIFA’s helm on Friday.
He insisted he was the man to reform world football’s governing body, slammed a “hate” campaign from European football and expressed his shock at the tactics exercised by US anti-corruption investigators.
Then, suddenly on Tuesday, it was announced there would be a news conference. The football world started to speculate – what would be the latest twist in FIFA’s sorry demise?
As the Swiss chief appeared on the podium and started his final address, it quickly dawned that what many had campaigned for was coming to pass – the reign of Sepp Blatter was over.
WHAT BLATTER SAID
“FIFA needs profound restructuring. I have thoroughly considered my presidency and thought about my presidency and the last 40 years of my life.
“I decided to stand again to be elected because I was convinced it was the best option for football.Advertisement

“Although the members of FIFA gave me a new mandate, this mandate does not seem to be supported by everyone in the world.”
WHY HAS HE GONE NOW?
The timing seems more than a shade peculiar.
Why would you suddenly change your tune just days after winning an election, unless there’s been another twist behind the scenes?
It could simply be that the claims about Valcke and a $10m payment were the final tipping point – and legal implications make it tricky to speculate what, if anything, else it could be – although ABC News have reported Blatter may be under investigation from the FBI.
“Sources familiar with the case told ABC News today that Blatter is being investigated by the FBI and U.S. prosecutors as part of the probe that led to last week’s stunning indictments,” read a report on ABC’s website.
“The FBI declined to comment because Blatter has not been publicly identified as a target of the investigation. The sources said the feds are conducting the FIFA probe the same way they would handle an old-school New York-style racketeering case.”
A source told ABC “now that people are going to want to save themselves, there’s probably a race to see who will flip on [Blatter] first.”
The office of the Swiss Attorney General – which is investigating alleged criminal mismanagement and money laundering at FIFA – had previously stated Blatter was not subject to investigation.
WHAT HAPPENS NEXT?
Blatter has laid out tentative plans to find his successor, urging FIFA to quickly arrange congress.
“The next ordinary FIFA congress will take place on May 13, 2016 in Mexico City,” he said.
“This would create unnecessary delay and I will urge the executive committee to organise an extraordinary congress for the election of my successor at the earliest opportunity.
“This will need to be done in line with FIFA’s statutes and we must allow enough time for the best candidates to present themselves and to campaign.”
WHO IS IN THE RUNNING?
Prince Ali bin al-Hussein has already thrown his hat back into the ring, despite his heavy defeat in the first edition of the presidential elections.
“I am always there to serve football and I think that’s the most important thing and to do so much work to fix this organisation in a proper way,” he said.
David Ginola, something of a comedy figure after previously running – and then pulling out – with assistance from bookmaker Paddy Power, has also signalled his intention to stand.