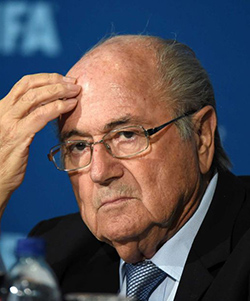 A LAWYER for fallen Fifa chief Sepp Blatter on Sunday confirmed he would launch an appeal against his eight-year ban.
“We will appeal it, of course,” US-based attorney Richard Cullen confirmed to AFP in an email.
The confirmation came after Fifa’s ethics tribunal on Saturday revealed it had provided Blatter and Uefa president Michel Platini with the reasons for imposing the ban, clearing the way for both men to appeal.
A lawyer for Platini, who has also been banned for eight years, had earlier confirmed an appeal would be launched.
Blatter and Platini’s appeals had been widely expected. Both men have repeatedly vowed to clear their names following the sanction.
In December, Fifa’s ethics tribunal ruled both men had abused their positions over a 2 million Swiss francs ($2 million, 1.8 million euros) payment made to Platini in 2011 for work carried out between 1999 and 2002.
Blatter, who has headed Fifa since 1998, was also fined 50 000 Swiss francs while Platini, a Fifa vice-president, was fined 80 000 Swiss francs.
The court insisted there was “no legal basis” for the payment that Blatter authorised for Platini in 2011.Advertisement