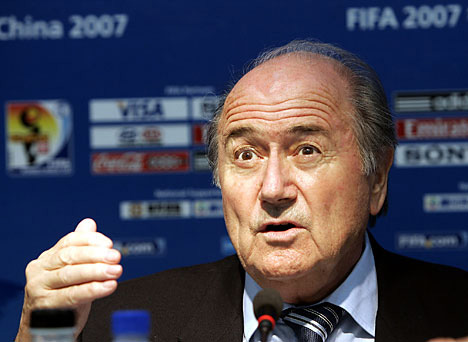 TEAMS involved in racial incidents should suffer more severe punishment like the docking of league points, FIFA president Sepp Blatter said on Wednesday.
The biggest problem we’ve had in recent days here in this continent is racism, discrimination. This is unacceptable,” Blatter said.
“We must deduct points, relegate a team. The moment we have the courage to do that discrimination will end,” he told the presidents of South American football confederations and other officials at the start of CONMEBOL’s Congress at its Paraguayan headquarters.
The most recent case of racism in South America involved Panama striker Luis Tejada of Peruvian side Juan Aurich who walked off the pitch during a match after being racially insulted by fans of Cienciano.
There have been frequent cases of racial abuse of players in Europe and South America in recent years but Blatter said fines or the closing of stadiums were not enough punishment.
“I think that one day (racism) will disappear from football… but that’s not enough, we need new conditions.
“We have the regulations but they are not being applied in the whole world by the disciplinary and control bodies,” said Blatter, who will be seeking a fifth term at the FIFA presidential election on May 29.
CONMEBOL’s congress will ratify Paraguayan Juan Angel Napout as its president for a new four-year term and reiterate its support for Blatter in the FIFA election.
The Swiss is running against Michael van Praag of the Netherlands, former Portugal great Luis Figo and FIFA vice president Prince Ali bin al-Hussein of Jordan, who are attending the congress.Advertisement