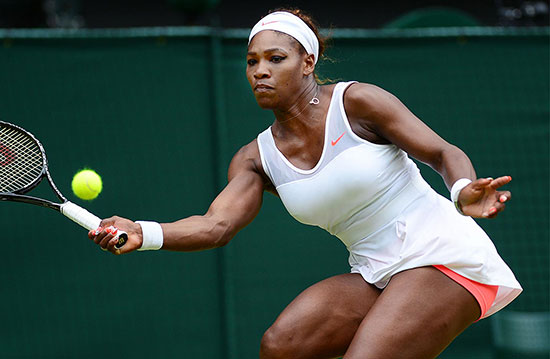 WIMBLEDON champions Serena Williams and Andy Murray raised the roof at the US Open on Thursday, powering into the third round with decisive straight-sets victories.
World No 1 Williams defeated fellow American Vania King 6-3, 6-3, her 306th Grand Slam singles match win tying her with Martina Navratilova for the most ever for a woman.
“This one’s kind of cool,” she said of her latest milestone, “to win 306.”
There could be more history in store for Williams as she seeks a seventh US Open title and a 23rd Grand Slam singles crown, both of which would be Open Era records.
She fired 13 aces, with a total of 38 winners against 87th-ranked wild card King, and said the troublesome right shoulder that has hindered her since Wimbledon wasn’t a problem.
“So far, so good,” said Williams, who was cheered on by rap mogul Jay Z and his pop superstar wife Beyonce as she booked a meeting with 47th-ranked Swede Johanna Larsson for a place in the last 16.
Despite wrapping up the victory in just 65 minutes, Williams said there was plenty of room for improvement.
“I feel like I made a lot of errors,” Williams said. “What really matters is I got the win. Hopefully I’ll just get better.”
By the time Williams opened the night session the rain that prompted organisers to close the new roof on Arthur Ashe stadium had tailed off.
Murray had played with it drumming on the roof, adding to the noise the US Open is famous for.
“You can’t hear anything, really,” said Murray, who downed tenacious Spaniard Marcel Granollers 6-4, 6-1, 6-4.
“I mean, you could hear the line calls, but not so much when he was hitting the ball or even when you’re hitting the ball, really, which is tough.”
Nevertheless, after needing seven set points to seal the first frame, Murray broke Granollers twice in the second set and once in the third to move through to a meeting with Italian Paolo Lorenzi, a 3-6, 6-2, 6-2, 6-7 (1/7), 7-6 (7/3) winner over France’s Gilles Simon.
Juan Martin del Potro, who has undergone four wrist surgeries since lifting the US Open trophy in 2009, closed out the action on Ashe with a 7-6 (7/5), 6-3, 6-2 victory over 19th seeded American Steve Johnson.
Del Potro, ranked 142nd in the world as he battles back from the injuries that nearly cost him his career, is back in the Open as a wildcard after a sparkling run to a silver medal in the Rio Olympics.Advertisement

WAWRINKA IN STRAIGHT SETS
As the showers lingered, a batch of doubles matches scheduled for outside courts were cancelled.
Among those who didn’t have the luxury of the roof, 2014 finalist Kei Nishikori of Japan waited out a third-set rain delay en route to a 6-4, 4-6, 6-4, 6-3 victory over 20-year-old Russian qualifier Karen Khachanov.
Third-seeded Swiss Stan Wawrinka, a two-time semifinalist, was also up against a qualifier, advancing with a 6-1, 7-6 (7/4), 7-5 victory over 243rd-ranked Italian Alessandro Giannessi.
Eighth-seeded Austrian Dominic Thiem downed Lithuanian Ricardas Berankis 6-4, 6-3, 6-2 to line up a meeting with Spain’s Pablo Carreno-Busta, who rallied from two sets down to beat Serbian Janko Tipsarevic 3-6, 4-6, 6-2, 6-4, 6-4.
Australian Nick Kyrgios, the 14th seed, put on a serving clinic, firing 27 aces and winning 45 of 48 first-serve points in a 7-5, 6-4, 6-4 victory over Argentina’s Horacio Zeballos.
Women’s fourth seed Agnieszka Radwanska of Poland survived an early onslaught from US Open debutant Naomi Broady to beat the Briton 7-6 (11/9), 6-3.
Fired-up fifth seed Simona Halep also advanced, downing Lucie Safarova 6-3, 6-4 in a battle of former French Open finalists.
Venus Williams, the sixth seed whose seven Grand Slam titles include two US Opens, coasted to the 70th US Open match win of her career 6-2, 6-3 win over Germany’s Julia Goerges.
The elder Williams, bedevilled by 63 unforced errors in a scrappy first-round win over Ukrainian Kateryna Kozlova, cut that to 17 in a crisp performance against the 64th-ranked German.