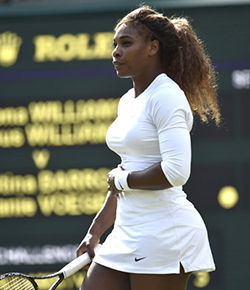 WHAT exactly is going on with Serena Williams?
After that peculiar departure from Wimbledon, where she had to be helped off the court by big sister and doubles partner Venus, her evident ill health was explained as “a viral illness”.
Williams herself played it down, describing it as a “bug”, without touching on the severity of something that disorientated her to such an extent that she was unable to hit a ball.
Now her coach Patrick Mouratoglou has admitted that she is in a “difficult period” in her life.
No kidding, you might think, seeing as she’s failed to get beyond the fourth round at any of the Grand Slams.
“Serena is clearly going through a difficult period. But since Wimbledon, we have had long hours of talks and we are getting back to work,” Mouratoglou told tennismagazine.fr.
“Today she is in the mood to get back to training so she can return even stronger. At no time was there any question of us stopping our collaboration.”
Perhaps most intriguingly, though, Mouratoglou shut down questions about their personal relationship, which has widely been reported to be a romantic one.
“I have never discussed private matters and I am not going to talk about them now,” he said.
But then he went on to add: “There have been difficult things. For sure, Serena is in a difficult phase but I will leave it there.”
That will do nothing to shut down speculation that there are issues between them that aren’t helping her on-court displays.
Can she recover her form and confidence? Of course. But the more issues she encounters off the court the more people will continue to speculate about her future prospects.Advertisement