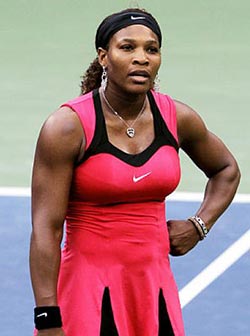 PAIN and pleasure go hand-in-hand for Serena Williams when it comes to the French Open and the American hopes she will get an overdose of happiness in one of her favourite cities as she targets a third Roland Garros title.
Two years ago, Williams hit the lowest of the low when she slumped to a first-round exit in Paris, her first and only opening round defeat in a stellar grand slam career that has earned her 17 major singles titles.
The pain and anguish of that defeat melted away just 12 months later when she lifted the Suzanne Lenglen Cup for a second time.
But in a career littered with triumphs, it was surprisingly only her second win at the home of claycourt tennis and she is on a mission to rectify that anomaly over the next fortnight.
“For me, the French Open is extremely important because it’s a grand slam I won only twice and I want to win more and more,” the world number one said following the draw which pitted her against local hope Alize Lim in the first round.
“I won five times Wimbledon, Australian, the U.S. Open, so for me it’s important.
“I have the capability of playing on clay, so I don’t know why I wasn’t more consistent on clay before. But, hey, I guess better late than never, right?”

For her rivals, Williams doing well on clay spells doom and gloom as it was the only surface where they felt they had a strong possibility of stopping her charge towards more silverware.
Over the last three years, she has won at least one title on European dirt every season and, if anything, appears hungry for more success on what is largely conceived to be her least favourite surface.
“I don’t know what clicked or didn’t click (on clay). I grew up on hard courts, and then when I turned 10 I played only clay until I turned pro,” added the 32-year-old, who will draw level with Martina Navratilova and Chris Evert’s haul of 18 majors if she wins in Paris.
“I’m really good now. I’m great. I feel like this is the only place I want to be. I don’t remember the last time I was defending champ (in Paris), so it feels really good that I’m here as defending champion.
“I’m really excited. I think I have had a really long, great career. It just feels really good to be at this point in my career and playing as defending champion.”Advertisement