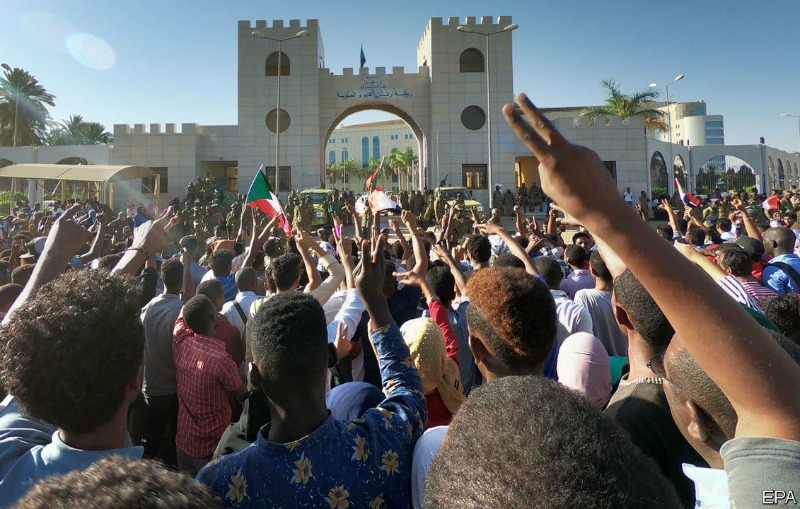 At least five Sudanese protesters and a member of the security forces have died in clashes in the capital, Khartoum.

They were killed in gunfire at a sit-in outside military HQ where demonstrators are demanding full civilian government. Dozens have also been injured.

Protesters said soldiers were responsible, but the army blamed it on “unidentified elements”.

Sudan has been ruled by a transitional military council since last month’s toppling of President Omar al-Bashir.

It is unclear exactly what happened but activists have been talking about how they were targeted by a gunman.

“He shot a bullet at me, he was 20 metres away from me, at most,” Raed Mubarak told the Reuters news agency.

“He saw me, and he meant to shoot me. It was intentional. He did not even shoot at my leg or up in the air, he shot at my chest, at the left, intending to hit the heart. He meant to kill me.”

The US embassy in Khartoum has said actions by the military council resulted in the violence.

“The tragic attacks on protesters yesterday… were clearly the result of the Transitional Military Council (TMC) trying to impose its will on the protesters by attempting to remove roadblocks,” it said on its Facebook page.

“The decision for security forces to escalate the use of force… led directly to the unacceptable violence later in the day that the TMC was unable to control.”

Demonstrators have been occupying the square in front of the headquarters since 6 April, five days before the president was overthrown by the military.

Initially, talks between the ruling generals and the protest organisers had shown little sign of progress.

However, just before Monday night’s violence, both sides announced they had agreed on the structure of a new administration.

The gunfire on the streets may point to a division within the military and an attempt to destabilise this process, says the BBC’s Alastair Leithead.

Some generals may feel frustrated that the sit-in continues despite major concessions from the military, while demonstrators feel they cannot leave the streets until they get what they want, our reporter adds.

The transitional military council pointed the finger at people trying to sabotage talks.

“Behind this are groups that…are working hard to abort any progress in negotiations,” it said, Reuters reports.