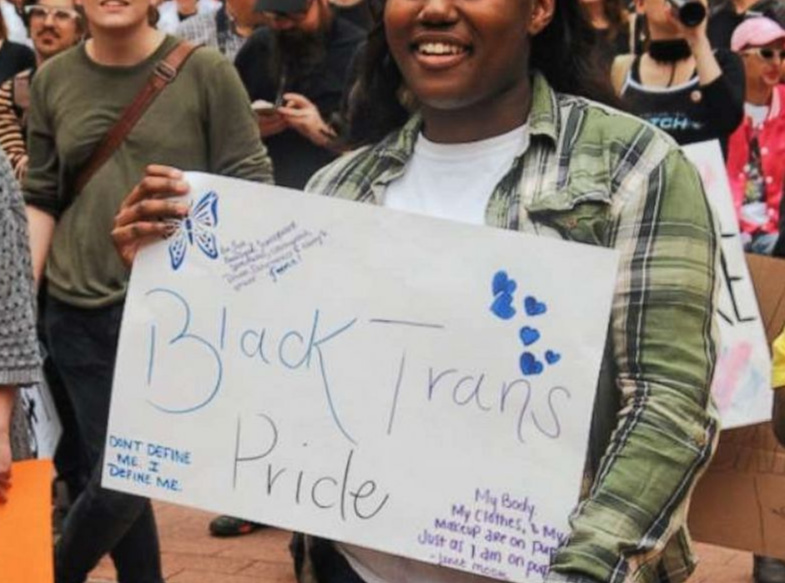 Harare, Zimbabwe – On his way to South Africa a few weeks ago, (TeeJay) as he prefers to call himself, proffered his passport to the immigration officer at the Robert Mugabe International Airport in Harare.

The image in the passport was totally different and the female officer had to invite another male immigration officer to check on the passport, unsure what she was dealing with.

TeeJay was sarcastically asked to present a proper passport as the one he had on that day either belonged to his sister or a close relative, according to the officials.

“These two guys were shouting on top of their voices and that unsettled me as it drew the attention of several other passengers boarding South African Airways (SAA).

“I got embarrassed, but managed to smile and proceeded, as they urged me to change my passport,” TeeJay narrated to me some of the challenges he faces on a daily basis.

“In their minds, I knew they thought I had used a passport belonging to a twin sister, but the matter was simply that I look more masculine now than at the time I obtained the passport,” TeeJay said.

TeeJay is a young transgender who was born female but in the process of transitioning to a male.

For purposes of clarity I will refer to TeeJay as male because that’s how he identifies himself.

He indeed looks masculine, has some beard, has a croaky voice such that one glance at him, one would not doubt his story.

GROWING UP AS A FEMALE

“I was born a female with all the feminine characteristics and its only eight months ago that I went for my full blood count, that is where I discovered I had more testosterones in my body, making me more of a man.

“There are times I would skip my mensuration cycle, it was very abnormal according to what the doctors said,” TeeJay explained.

Testosterone is the male sex hormone and an anabolic steroid that plays a key role in the development of male reproductive tissues such as testes and prostate.

It also promotes secondary sexual characteristics such as increased muscle and bone mass, and the growth of body hair.

Although TeeJay was born female, he has less oestrogen, a primary female sex hormone.

This is responsible for the development and regulation of the female reproductive system and secondary sex characteristics.

“I feel like I was deprived of a certain part of my childhood to explore life and fit in the society, I was a loner because I always felt different.

“I forced myself to do sport and that’s where I attracted some fans who ended up calling me ‘chap’, meaning boy,” TeeJay narrated.

Apart from school activities that worked like a therapy for TeeJay, his community did not accept him as who he was.

There are times when the community accepts some characteristics in a certain person because individuals in that setting would have grown watching you and naturally understand.

It is however different for a stranger who begins to exhibit certain trends in a new community, the acceptance is usually very low and painful.

Dr Nombulelo Crocco is a Bulawayo based Clinical Psychologist who has offered traumatic counselling to some of the few trans-genders in Zimbabwe.

“Lack of understanding leads to stigmatising trans-gender individuals, it puts a burden on them, which we call ‘minority stress’.

“Literature does indicate that minority stress causes depression, anxiety, alcohol and substance use disorders among trans-gender individuals all over the world,” Dr Crocco explained.

Her clients get an opportunity to speak about what’s bothering them although this intervention is expensive.

Community always chooses what it wants to accept and what it cannot accept owing to lack of information.

TeeJay was however lucky as his own family accepted him and played a big role in making sure he is assisted.

His family was Christian as he grew up, meaning TeeJay spent most his time in church until his own sister exposed him and he was forced to go and stay with a Pastor for “prayers and deliverance”.

“It only changed my view of who God is to me, but did not change how I feel,” TeeJay said.

TeeJay’s mother started reflecting on his behaviour while he was still a toddler and when he was now going to early learning institutions.

This interaction with an understanding family and church leaders helped TeeJay stand firm on his footing until recently when he began his transition.

“It wasn’t an easy journey, but we are getting there because of the family support that I am getting,” TeeJay added.

Unfortunately, Zimbabwe does not have gender affirming services hence TeeJay had to receive treatment South Africa.

He is currently on a monitored hormonal therapy, which will ultimately help him develop male feature by a certain period.

“Religion and tradition play a big role in terms of people’s perception and this determines if a certain community is going to tolerate, accept or stigmatise members of the LGBTIs,” another transgender living in Zimbabwe, Bree Alessandra said.

Bree was born male but is transitioning to a woman, a process that saw her visit many churches and spiritual healers owing to misunderstandings in her community.

According to Bree, the church failed to help as her own relatives who knew and understood her condition turned against her because of their church beliefs.

However, TeeJay was very fortunate as the church itself did not castigate or undermine him like what happened to Bree.

However, there is a general misunderstanding of who trans-genders are and how the church and society as a whole could help.

In the book of Genesis, God talks of the creation where a man and a woman were created, and it was well with Him.

In the books of Matthew and Mark there is the greatest commandment about us humans loving God with all our hearts, all our minds and strength and it also talks about loving our neighbours as we love ourselves.

“Those two clearly indicate that as far as God is concerned, we are all equal, that’s why before Christ healed that crippled person, He asked ‘did he sin or did the parents sin?’

Trans-genders are humans like us and it’s for the church to preach the word of tolerance.

“When we look at those people who are members of the LGBTI and facing challenges such as discrimination, they suffer from segregation, but they are human. So, as church we need to stand with them,” Dr Phiri reiterated.

TeeJay indicated that while he was receiving assistance in church, he also had to seek psychotherapy from professionals outside the country. He got worried when he noted that some churches believe being a trans-gender is a result of witchcraft.

While various cultures in Zimbabwe secretly accept that trans-genders do exist, the country’s constitution, which is explicit on, the gays and lesbians and this makes it very difficult to accommodate them, whereas trans-genders are not necessarily homosexuals.

Transgenders face serious challenges in a country like Zimbabwe where laws do not cater for their genitalia surgical change in order to be reassigned a gender of their preference and this calls for the change of the legal status.

Zimbabwe is a creature of statutes and is governed by the Constitution, transgender persons are not legally recognised.

While section 56 of the Constitution offers extensive protection against discrimination of any kind, and equal protection to all, it does not speak directly to trans-gender rights.

“No guiding provisions on gender reassignment surgeries for candidates seeking to have procedures done or how the person is to be recognised in their new gender,” a Harare based legal analyst Rumbidzai Venge indicated.

The change of identification documents following the transition is a topic yet to be discussed in the country.

Zimbabwe is yet to record such identity changes out of fear of discrimination or ignorance of what procedures could be followed by the Registrars’ office.

TeeJay intends to eventually change all his identity documents to suit his new gender but one thought keeps coming to his mind that he is likely going to face challenges.

“We are looking forward to presenting a position paper on what the trans-gender community expects in the on-going community consultative meetings being held by the Zimbabwe Human Rights Commission.

The meetings are speaking on how Zimbabweans are finding it hard to obtain identification documents,” Tee Jay said.

According to TeeJay, the position papers will also touch on the deliberate choice one should have when changing identity documents, as some would just prefer changing documents without transitioning at all.

“Our country should be able to identify people with their preferred gender and sex when issuing passports, national identity documents,” TeeJay added.

He indicated his application soon could become a test case and that he is ready to face the challenges.

“I feel like I am trapped in a wrong body and think it is my right to be accorded the opportunity to change my sex and gender,” remonstrated TeeJay.

It would appear Zimbabwe is still stark in the past noting how the whole country responded each time the late former President Robert Mugabe castigated gays and lesbians.

There was no deliberate attempt by the government to differentiate trans-genders who on most cases are not attracted to the same sex but just that theirs is a unique case.

“Zimbabwe is in stark contrast with its counterparts in the region South Africa, Botswana, Namibia and Mozambique, which have enacted provisions in their laws offering LGBTI rights protection.

“Zimbabwe remains unmoved; it remains a fait accompli, an accomplished fact that is firmly rooted in the stance that gay rights are not a priority as it is not in tandem with the Constitution or established beliefs and African practices,” lawyer Rumbidzai Venge said.