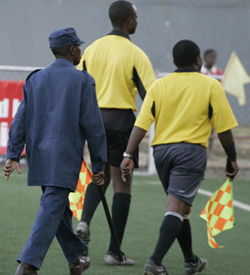 AFTER surviving Premier Soccer League charges two weeks ago, Shabanie Mine have been finally been hauled before the disciplinary committee for causing the abandonment of their match with Harare City at Maglas on Sunday.
The match was called off after 81 minutes with City leading 3-1 – a result which is set to be upheld by the PSL.
Shabanie beat PSL charges after their violence-marred league meeting with Highlanders at the same ground on Good Friday. Highlanders, who won 2-0, were fined US$8,000.
But now the Zvishavane side will have their turn in front of the disciplinary committee after their fans threw missiles into the field of play, interrupting the game after a goal had been ruled out for offside for the second time in the match.
They have been charged for violating Order 31.1.13 of the PSL Rules and Regulations that were amended at the start of the season to impose stiffer fines for offenders.
The section imposes sanctions against: “Causing the abandonment or abandonment or attempting to cause the abandonment of a match (3) throwing or attempting to throw missiles, bottled and other objects potentially harmful or dangerous or not, on to the pitch, or at any person, (5) acts of violence or attempted acts of violence against anyone at the game, (6) insulting players, team officials or any other person at the game.”
Referee Sambulo Dube, who was in charge of the match, has submitted a report to the PSL which will help the disciplinary committee in reaching a decision.
After the Good Friday incident, Highlanders said Shabanie – as the home team – had not provided enough security to contain the trouble.