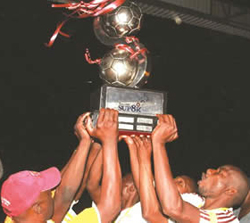 FC Platinum 0-0 Shabanie Mine
[Shabanie win 5-3 on penalties]
SHABANIE Mine won only their second major trophy in 12 years after lifting the BancABC Sup8r trophy with a derby win over FC Platinum on Saturday.
Luke Masomere’s men needed a penalty shoot-out to overcome their neighbours in their own backyard of Mandava.
The two Zvishavane sides were the last teams standing in the tournament played by teams finishing in the top eight in last season’s Premier League title race.
Blessed Mbavarira, Valentine Ndaba, William Ngonya and goalkeeper Victor Twaliki converted for Shabanie Mine, while Daniel Veremu, Winston Mhango and Thabani Kamusoko found the target for FC Platinum.
Obrey Chirwa then missed Platinum’s fourth spot-kick allowing Shabanie Mine skipper Tafadzwa Mombeshora to take the clinching spot kick which handed the asbestos miners their first trophy since beating Dynamos in the 2001 BP Cup final.
Masomere, who has stayed with Shabanie Mine despite the club going through biting financial problems, said at full-time: “We needed this victory more than anyone else. No week passes without us witnessing problems of some sort. But everyone can smile today in Shabanie, the victory is theirs.”
The stadium was already packed an hour before kick-off as fans of both sides poured in to witness history.
Shabanie dominated the first half, but the introduction of Marshall Mudehwe and later Chirwa turned the tide in favour of FC Platinum after the break.
Tarisai Rukanda and Caleb Masocha were a handful for the FC Platinum defence, while Pervington Zimunya threatened with two first half free kicks.
Platinum goalkeeper Tizayi had to summon all his acrobatic abilities when he tipped over Zimunya’s curling free kick in the 21st minute.
Right-winger Frankson Bushire and Erea Phiri also came close as Shabanie searched for the opener.
But the second half belonged largely to Lloyd Mutasa’s men, although their twin strikers, Donald Ngoma and Nelson Maziwisa, let their teammates down as they took turns to miss glaring chances.
Ngoma could have wrapped up the game with 12 minutes of play left, but his bouncing header went inches wide of the upright.
Substitute Chirwa then shot wide in the 81st minute after he was cleverly set up by Maziwisa, whose well-placed header had also been expertly saved by Twaliki five minutes earlier.Advertisement

The match went into extra-time but still the two teams could not be separated. The usually-cool Mutasa could not hide his emotions in the 115th minute when he smashed a plastic water bottle on the ground in reaction to a miss by Maziwisa.
Mutasa, who lost the 2009 final as Shooting Stars coach, said: “We lost the plot, we should have won the game in 90 minutes, but we failed to convert a number of chances.
“But there is always a second time and I should say it is good that we managed to reach the final.”