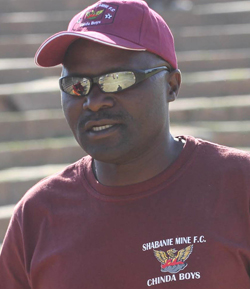 Shabanie Mine 1-3 Harare City
[Match abandoned due to crowd trouble]
SHABANIE Mine face action from the Premier Soccer League after their home match with Harare City was abandoned nine minutes from time due to crowd trouble on Sunday.
The mid-table clash at Maglas saw three disallowed goals – two of them for Luke Masomere’s asbestos miners.
City were leading 3-1 when their defender Zibusiso Sibanda deflected Farai Mususunye’s low shot past his own keeper, only to get a huge slice of luck when referee Sambulo Dube chalked it off because of an offside decision in the run-up.
Early in the first half, Shabanie also had another goal disallowed for offside when Crispen Dickson beat his goalkeeper Maxwell Nyamupangedengu under pressure from Caleb Masocha. Dube’s first assistant Lloyd Mapanje had his flag up for offside.
The second disallowed goal saw tensions boil over as fans threw stones and other objects onto the pitch. Following a lengthy delay, Dube consulted match commissioner Hasmon Zingoma who advised him to call off the match.
City led through goals by Osbourne Mukuradare, Trymore Nyamandwe and Martin Vengesayi while Pevington Zimunya’s strike had kept Shabanie interested until the late offside decision and crowd trouble.
At Rufaro, Dynamos closed the gap on joint leaders Highlanders and FC Platinum to just five points as Washington Pakamisa scored his sixth in four games in a routine 2-0 victory over Hwange.
Pakamisa had the champions ahead after just two minutes before Farai Mupasiri weighed in with a second 15 minutes from the end to give Callisto Pasuwa’s men their third win on the trot.
Highlanders drew 0-0 away to Platinum at Mandava on Saturday. The two teams remain tied on 20 points but Highlanders edge it on goal difference.
Highlanders survived an injury time scare as Dumisani Ndlovu made a goal-line clearance moments after Obrey Chirwa’s penalty appeal was waved away by Mutare referee Kuda Manhanga after going down in the box under a challenge.
Chirwa had earlier hit the crossbar as Platinum dominated.
At Gibbo in Chiredzi, Joseph Mutambiranwa poked home from a goalmouth melee in the 90th minute to give CAPS United a much-needed 1-0 win over Triangle.
Also on Saturday, Chicken Inn scored twice in the opening six minutes as they overcame Motor Action 2-1 at Luveve.

Tripple B fell to their fourth consecutive defeat, going down 1-0 to Monomotapa at Dulibadzimu.
Black Rhinos beat Black Mambas 2-1 in coach Arthur Tutani’s first match in charge after Nesbert Saruchera was kicked upstairs to the post of director of coaching following four consecutive losses.Advertisement

Buffaloes lost 2-0 away to How Mine who are holding steady just three points off the leaders after nine games.