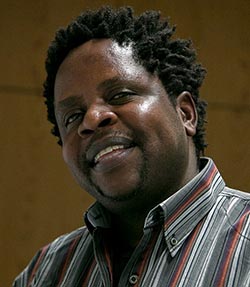 TWELVE years after making its stage debut, the musical masterpiece, Soil of the Son, makes its return with new traditional songs, dance and poetic language.
The musicalm written and then directed by award winning playwright, Christopher Mlalazi, catapulted Umkhathi Theatre Works to instant stardom.
Set in history, the musical is a highly charged fantasised glimpse of the childhood of Shaka the Zulu King, and events that might or might not have led to his rise to power and ‘anger’ that forever changed the face of Southern Africa.
This musical, which has now been rebranded “Warrior”, will be showcased by Umkhathi Theatre Works and directed by Matesu Dube.
The group is already in rehearsal, although the dates when the play will run are yet to be released.
In an interview with NewZimbabwe.com Mlalazi, who is currently based in Germany, said the play was still relevant in the present day setting.
“In 2003, I wrote a musical for Umkhathi Theatre titled ‘Soil Of The Son,’ which was premiered that same year. The musical attempts to tell the story of the childhood of Tshaka the Zulu, up to the time he takes over the chieftainship of the Zulu people, but before he created the Zulu empire.
“We can say the musical is a fantasised psychoanalysis of the protagonist’s childhood if we are to theorise that factors in his childhood growth might have led him to be the legend or villain he ended up being as an adult, which also led to the creation of the Zulu Empire, one of the greatest at its time on the continent, and which ultimately led to the cold blooded assassination of the protagonist by his brothers,” said Mlalazi.
He adds: “So this was my premise for the musical, that in order to understand the adult, let’s study their childhood first and not just take them at face value. I don’t want to unnecessarily praise the musical, but when it was first performed we had a standing ovation and we have witnesses to the fact.”
Mlalazi said the play had a long shelf life and those who did not watch the masterpiece deserve to watch it this time around.
“We want to bring this play back again as we feel it is not the kind that you can do once and then relegate into the dustbin.
It is the eternal type, that can be run over and over again until kingdom come just like The Lion King, as there will always be new groups of people interested in the story of Tshaka, as a subject of history, intellectual, political and military strategy study, and last but not least, just for pure old entertainment,” he said Advertisement

Mlalazi has previously penned another historical play, titled Nkulumane, which is told the story of Mzilikazi and his son Nkulumane at the time when the prince had crowned himself King of the Ndebele when his father had gone missing.
“We will be bringing this play back again sometime in 2016 as it is also another ‘eternal’ production,” said Mlalazi.