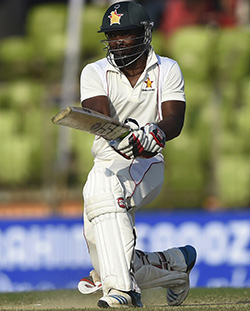 AL HASAN became only the third player in history to score a century and take 10 wickets in a match as Bangladesh whipped Zimbabwe by 162 runs in the second Test on Friday to win the series.
The left-arm spinner claimed five for 44 in Zimbabwe’s second innings as the tourists, set a victory target of 314, were bowled out for 151 after tea on the fifth and final day in Khulna.
Bangladesh, who won the first Test in Dhaka by three wickets, took an unbeatable 2-0 lead in the three-match series.
Shakib’s 10-wicket haul in the Test — he took 5-80 in the first innings — followed a crafty 137 on the second day and deservedly won the man of the match award.
The 27-year-old joined Ian Botham of England and Imran Khan of Pakistan as the only cricketers to score a hundred and claim 10 wickets in a match.
Hamilton Masakadza, who scored a century in the first innings, was the only Zimbabwean to defy the spinners in the second innings with 61.

Shakib began by removing Sikandar Raza and Brendan Taylor, then dismissed Masakadza after lunch before grabbing the wickets of Elton Chigumbura and Natsai M’shangwe.
Shakib was supported by left-arm spinner Taijul Islam, who took 3-44, and leg-spinner Jubair Hossain (2-42) as Zimbabwe lost their last five wickets for 14 runs.
Earlier, Bangladesh declared their second innings at 248-9 in the morning session after Shuvagata Hom completed his maiden half-century. Mohammad Mahmudullah top-scored with 71.
The third and final Test starts in Chittagong on November 12. The Tests will be followed by five one-day internationals.Advertisement