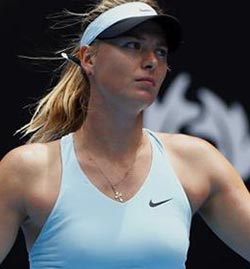 MARIA Sharapova’s quest for a second Australian Open title was halted in the fourth round on Monday when the third seeded Russian ran out of steam against an inspired Dominika Cibulkova, who emerged with a 3-6 6-4 6-1 victory on Rod Laver Arena.
After her Slovakian opponent had levelled the match, the 2008 champion took a medical time-out before and third set for treatment on a hip injury but Sharapova was reluctant to use that as an excuse for her shock defeat.
“Those aches and pains are expected when you spend a long time on the court,” Sharapova said after she became the second former champion to crash out in the fourth round following world number one Serena Williams’ loss on Sunday.
“I haven’t been playing the best tennis of this tournament, but I found ways to get through to the last two matches.
“Tried to do that again today, but she played extremely well.”
Sharapova, despite being rusty after missing the latter part of the 2013 season with a shoulder injury had been expected to comfortably advance against the diminutive Slovakian despite Cibulkova having beaten her in a grand slam before.
Cibulkova overcame Sharapova on her preferred surface of clay at the 2009 French Open and it was the first time the pair had met on hard courts which should have favoured the Russian’s power game, though the Slovakian was supremely confident.
“I went on the court, and I was… 100 percent sure that I really can beat her. I can beat her on the big court, in the important match, you know, on the grand slam,” Cibulkova said.
“I did it before, and I knew she knows me. I also knew that she knows it’s going to be a tough match.”
Sharapova has struggled with her serve throughout the tournament and her woes continued on Monday, and she was unable to dictate rallies from the baseline.
Cibulkova had three break points throughout the first set though Sharapova fought them off until serving for the set at 5-2 when she faltered.
Cibulkova, however, could not consolidate the break and her third double fault handed Sharapova the set 6-3 in 39 minutes.
The 20th seed raced to a 5-0 lead in the second set as the Russian’s range and accuracy deserted her before Sharapova somehow rattled off the next four games to give her a sniff of sneaking into the quarter-finals in straight sets.Advertisement

The 24-year-old Cibulkova, however, held her nerve to hold serve and send it into a decider.
Sharapova then took the medical time-out but was unable to halt Cibulkova’s momentum as the Slovak jumped out to a quick 2-0 lead and raced through to win the set and reach her first Australian Open quarter.
“Actually I didn’t know,” Cibulkova said when told she had made her first quarter-final at Melbourne Park.
“I just realise now. It’s great, you know. I think this was the only grand slam where I just had my fourth round and a couple of bad losses.
“It feels great and especially I played well and it was a tough match.
“I came out from one set down. This is what makes me really strong and proud of myself.”