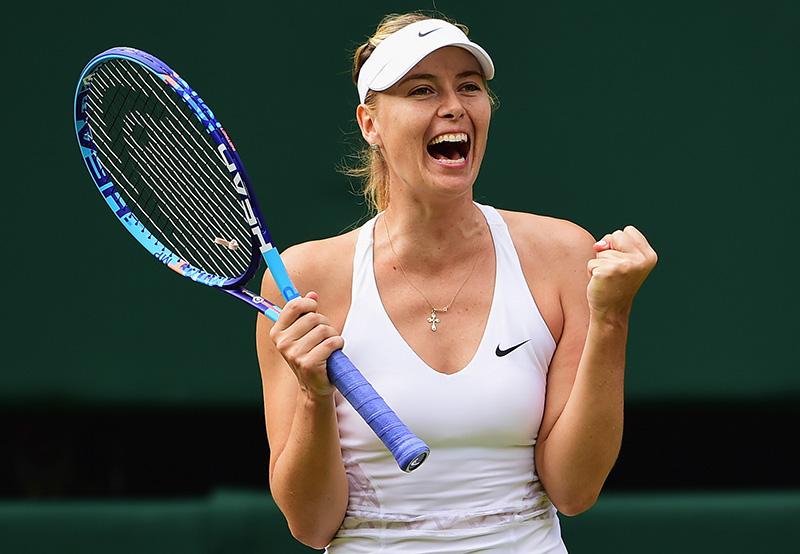 RUSSIAN star Maria Sharapova giggled with delight as she revealed how she plucked up the courage to pop the question and got to practise with Rafael Nadal at the Italian Open.

The two former world number ones hit balls together on the red clay of the Foro Italico where they are both multiple winners.

“I saw he was practising on the court right before me,” explained Sharapova, after advancing to the second round on Tuesday past Australian Ashleigh Barty.

“And I said to my team ‘wouldn’t it be amazing if I just came up to Rafa and said ‘would you hit a couple balls with me?’

The Russian was overjoyed at being able to rally with the 16-time Grand Slam champion, tweeting: “Two minutes on court with the GOAT @RafaelNadal #BucketList Was so nervous.”

In Tuesday’s match played in rainy conditions, five-time Grand Slam winner Sharapova needed two and a half hours to master 18th-ranked Barty 7-5, 3-6, 6-2 in their first round game.

She next meets Slovak Dominika Cibulkova as she bids to recapture the title she won three times in 2011, 2012 and 2015.

“This tournament has been special in my career,” said the 31-year-old, who received a wild-card entry last year as she made her comeback from a 15-month doping ban.

She retired injured from her second round match to end her hopes of qualifying on merit for Wimbledon’s main draw after being denied a wild-card entry to Roland Garros.

“It’s brought me a lot of great matches and a lot of match play toward the Grand Slam that we all look forward to playing.

“And usually it’s the last tournament I play before Roland Garros. So, it is an important one,” said two-time French Open winner Sharapova who reached the quarter-finals in Madrid last week.

“But, I’ve also had very tough moments here, as well. Last year was a very difficult situation to be in and going into that match.

“I’m just a little bit more relieved this year. I feel like I’m not thinking about things and just playing and not worrying about anything else. Which is nice.”