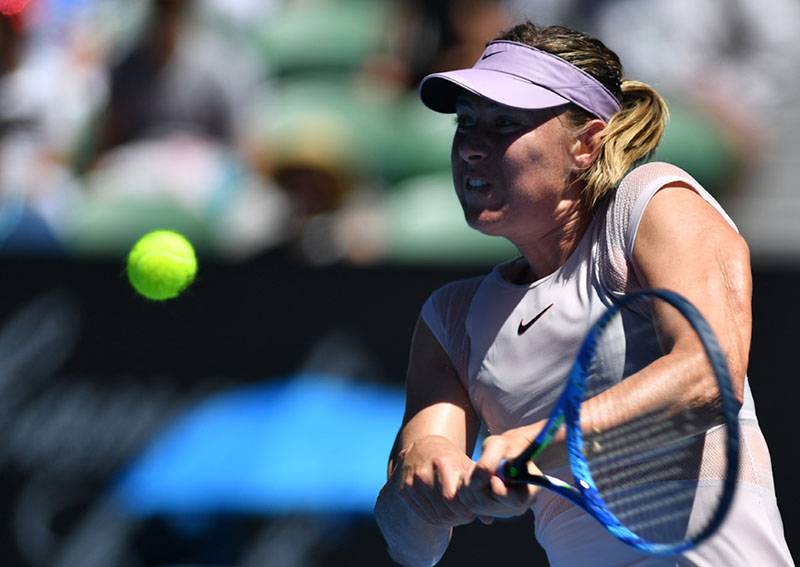 Maria Sharapova said her passion for tennis remained undimmed Monday after a serving a 6-0, 6-0 “double bagel” to Britain’s Harriet Dart in the Australian Open first round Monday.

The veteran five-time Grand Slam winner, who has struggled with injury since returning from a doping ban in 2017, showed glimpses of her old ruthless self to dispatch Dart in just 63 minutes.

Dart left the court in tears but Sharapova was unapologetic when asked if she empathised with the young qualifier.

“There is no time for that, I’m sorry to say,” she said. “(Not) when you’re playing the first round of a Grand Slam.”

The 31-year-old Russian arrived at Melbourne Park as the 30th seed but said she still had the desire to succeed at a tournament she has won once, in 2008, and made the final a further three times.

Britain’s Harriet Dart left the court in tears after a 6-0, 6-0 demolition by Russia’s Maria Sharapova

“There is nothing like going out and playing a match, especially in a Grand Slam, the feelings, the nerves, anticipation of a first round,” she said.

Sharapova, who won her first major at just 17, added that she was feeling positive after “tough times” in her career and was not ready to make way for a new generation.

“The youngsters are coming up and they’ll eventually take our place but not just yet, we want a little more time,” she said.

“I still really have the passion for this. I enjoy seeing the effort that I’m able to put in, and I think that hard work will always ultimately come to the surface.”

The former world number one said Andy Murray’s announcement that this year’s tournament Down Under would be his last had underlined her determination to make the most of her time in the spotlight.

“You realise that you’re not immortal, you’re never going to play this forever, even though we’ve done it as long as we can think of,” she said.

However, she conceded her thoughts at times had turned to life after tennis.

“At one point, life goes on and there’s a lot of things to look forward to,” she said.

“You have family, children, other business ventures. To me, that doesn’t make me sad, that makes me excited.”

Russia’s Maria Sharapova has served up double bagels at least five times on tour, including two in a row at the 2013 Australian Open

Sharapova was far from perfect against Dart, committing three double faults and eight unforced errors, but was never threatened by the 22-year-old Londoner.

Dart made a hesitant start against her childhood idol.

Sharapova pounced on the Briton’s weak second serve to repeatedly break her opponent, bringing up the first set bagel after 31 minutes.

The second set followed the same pattern, with Dart finally put out of her misery trying to save match point when she hit a return wide despite having an open court before her.

“Despite my opponent not having the best day, you still have to get the job done,” Sharapova said.

Sharapova has served up double bagels at least five times on tour, including two in a row at the 2013 Australian Open against fellow Russian Olga Puchkova and Misaki Doi of Japan in the first two rounds of the tournament.

She was on the wrong side of the ledger when American Lindsay Davenport beat her 6-0, 6-0 at Indian Wells in 2005.