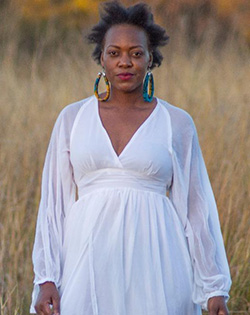 She has gone through a lot in life and is only where she is now through the Grace of God, hence her shift to gospel music

SHERON Rutendo Makovere, a former backing vocalist with Tanga Wekwa Sando, has embarked on a solo career, six years after leaving the jazz crooner.
Sheron worked with Tanga from 2007 to 2011 when she left to concentrate on her new job which was so demanding that it gave her no chance to do music.
“I got a full-time job in 2011 and I had to leave, although I would still do backing vocals here and there for him and also for Diana Samkange and Dees Montana,” she said.
She however, decided to start a solo career last year, practicing after hours and during weekends with her new band, The Christian Vibes.
Born and bred in Triangle, the 31-year-old diva has so far released three singles, and is working on the compilation of an eight-track album which is set to be released early 2018.
The three songs were produced by Lazzy T of Big Tinx Records, who is also set to produce the debut album.
Sheron says she has gone through a lot in life and is only where she is now through the Grace of God, hence her shift to gospel music.
“I felt the need to speak more on Grace and how I was saved myself so I wanted to spread the word through singing; having experienced a lot of things in my life and realised it was all Grace that got me to where I am now.”
She would, however, not share her life story, choosing to leave it to her music to tell it all.
“My first song, Shine Your Light, talks about the light of God being the only one that leads and guides us in how we should allow God to lead and guide us in life. In that way, you will not go astray because the secret is He never fails us.”
Sheron said the song also speaks about focusing on the protection that we get from God each day, saying she had realised that He continued doing good things for her and always fought for him.
The other song titled Hold On, she said, encouraged people to stay focused on God no matter what they went through.
“In the song I give the example of how Hannah waited for God and never gave up. People need tom be patient because God’s time is always the best.”Advertisement

She has so far released three singles and was working on the remaining five songs that would make up her debut album.
“We have been sharing these songs on social media and some radio station so that people know what to expect when we finally launch the album,” she said.

“We have received overwhelming responses from the audiences and people are expecting to hear more from us.
“We will soon be staging live shows, but I would like to thank National FM, Diamond FM and, most recently ZiFM Stereo, who have been giving us airplay,” she said.
We asked Sheron why she had settled for reggae music to spread the word of God.
“There was a lot of reggae in my family, my mother and brothers love reggae music and I have developed a passion for reggae, it is in my blood,” she said.
Reggae was also different from genres like ZimDancehall and Hip-hop, which most youths were into in that it appealed to a wider audience.
“The idea is to spread the word and with reggae music, even my father would listen; so I am assured the message will spread across different age groups,” she said.
Born in a family of five, Sheron is the only girl and the fourth child. She started her music career way back when she was in Form 1 and she would sing in the school choir.
“I joined the school choir for fun but then realised I had a voice. I would sing the national anthem at assembly and other school functions. I however, took it seriously when I auditioned for Tanga after I had come to Harare for my university studies,” she said.
Sharon holds a Bachelor of Science Degree in Sociology and is currently employed by Dee-Kaw- Zee, a jewellery shop in Milton Park where she works as a Creative Designer.