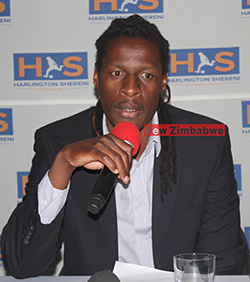 FORMER Zimbabwe international leftback Harlington Shereni’s testimonial match which had been scheduled for the National Sports Stadium on Saturday has been called off due to unforeseen circumstances.
“Harlington Shereni regrets to announce that due to unforeseen circumstances the Harlington Shereni testimonial match, planned for 27 June 2015, at the National Sports Stadium, has been called off.
“New dates and arrangements will be communicated in due course. We are not able to proceed with the match this weekend. We will advise of new dates that will suit all stakeholders in due course.
“Additionally, we will postpone all scheduled events like the dinner gala,” Shereni said in a statement.
The Former Warriors left back was set to hold a testimonial match expected to feature several high profile African and European stars.
Among players who were set to feature in the testimonial was Senegal’s El Hadji Diouf, Ivorian defender Emmanuel Eboue and Bonaventure Kalou.
Zimbabwe players also expected to feature in the high profile testimonial included Benjani Mwaruwari, Norman Mapeza, Costa Nhamoinesu, Khama Billiat and Kingstone Nkhata among others.
The purpose of the match was to raise funds for the Harlington Shereni Foundation which aims to provide talented youths the opportunity to improve their sporting talents and realize their dreams while maintaining their academic studies.
Shereni, who turns 40 on July 6, played 23 times for the Warriors and scored five times. He played for Caps United, Air Zimbabwe Jets and Dynamos between 1998-1999 en-route to SR Delemont in Switzerland before moving to FC Istres in France in the 2003/2004 season.
He then joined French Ligue One side En Avant Guingamp and played for three seasons in which he made 71 appearances, scoring five times between 2004 and 2007. He then moved to FC Nantes for another three seasons where he scored seven times in 48 appearances.
Shereni was then sent on loan to Racing Club Strasbourg between 2008 and 2009, scoring four times in 26 matches before retiring from the game which gave him fame and a little fortune.Advertisement