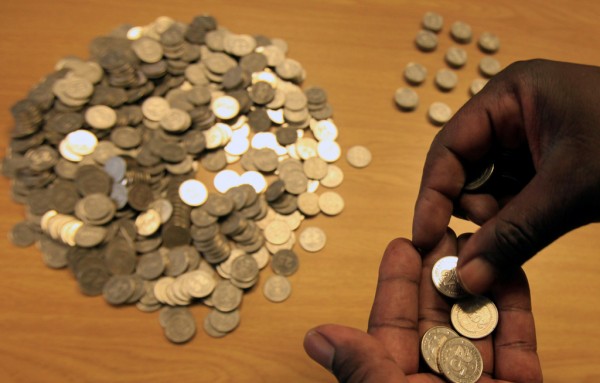 SCORES of bank depositors were left stunned in Mvurwi last week when a local CBZ branch allowed them to withdraw a maximum $100 each in 10 cent coins.

This comes as the country continues to grapple with a liquidity crunch which started back in 2015 when US denominated notes started disappeared from the formal system while being traded at a premium on the black market.

To ease the crisis, government, through the central bank, moved to introduce bond notes but kept the highest denomination at $5 in attempts to discourage the trading of the local note on the streets.

This was to no avail as the bond note also quickly disappeared, leaving banks to issue 50 cent and $1 coins.

But it would seem the higher denominated coins were also disappearing, something that saw a Mvurwi branch turn to issuing 10 cent pieces which amounted to a thousand for each one of those who were lucky to get $100 each on the day.

“At the CBZ Mvurwi branch, each one of us was getting $100 in 10 cent coins,” said a depositor who preferred to be identified only as Cornelius.

“Bank staff said they could not help the situation as they were also receiving the money in those denominations from the Reserve Bank.”

The account holder said three of his workmates also received their in 10 cent coins on the same day.

There are fears that if the situation remained that way, farmers in the agriculture rich area could find themselves soon queuing for coins while trying to withdraw thousands of dollars in their farming proceeds.

Reserve Bank governor John Mangudya could not be reached for comment while Finance Minister Patrick Chinamasa simply promised to investigate the matter before cutting his phone.

However, addressing MPs in parliament recently, Chinamasa said recurrent cash shortages in the country were a product of an inefficient circulation of money in the formal system.

“Even if the central bank governor were to pump billions, whether of bond notes or of US dollars, that money is withdrawn and it is never re-deposited in the banks,” Chinamasa said then.

“…The circulation is inefficient and you cannot run the economy that way. Now, when we inquire into the reasons, it is actually boiling down to lack of trust and confidence.”

Since the onset of the cash crisis, ordinary Zimbabweans often spend nights sleeping on city pavements in front of banking halls in attempts to secure front positions when banks open the next morning.

Most often find themselves being allowed to withdraw amounts as little as $20 a day while incurring huge costs in cumulative bank withdrawal charges.

Those not so lucky returned home empty handed.