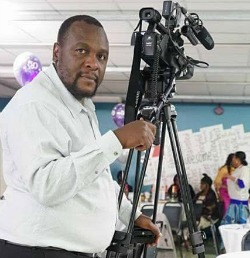 PROMINENT UK-based media production expert Shadreck Rukweza has died.
Rukweza was an experienced specialist in wedding, event and celebration video filming based in Birmingham, West Midlands.
According to friends and relatives, Rukweza died of a suspected heart failure at his home in Birmingham.
Born in 1975, the owner of Shaddy Media Production was a well-known person throughout the United Kingdom.
“Tragic to hear about the death of Shadreck Rukweza last night. One of the most hardworking Zimbos in the UK running a nice little operation Shaddy Media the last few years. Everyone especially within the West Midlands area will have seen him at work or used his services at some point. Nice guy and a total legend. 2016 does it again. May he rest in peace,” wrote one of his friends, Mike Tashaya, on Facebook.
A message from his colleagues at Flame Lily Arts said: “We are deeply saddened by the news of the passing of our dear friend and colleague Mr Shadreck Rukweza of Shaddy Media Production. We have worked with him on several projects and we were inspired by his passion and dedication to his work and family. To the Rukweza family we are with you in prayers, may you find comfort in the Lord during this difficult time. May his soul rest in eternal peace.”
So popular was Rukweza that his home was by Tuesday evening full of mourners.
Shaddy, as we he was known to his mates, is survived by his wife Sibongumusa and three children.