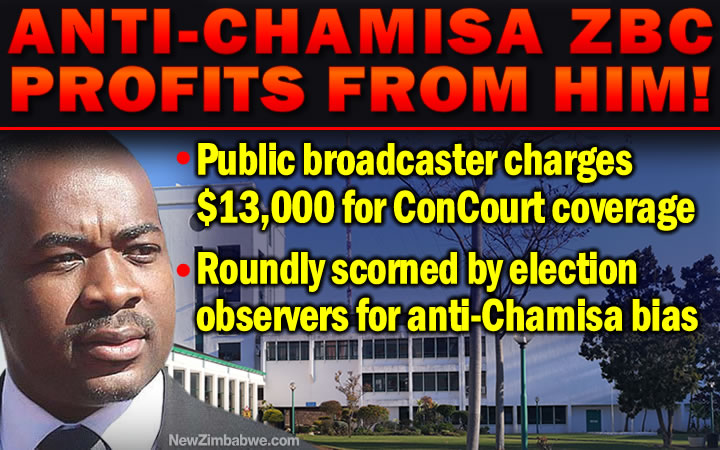 PRIVATE and international broadcasters wishing to broadcast Wednesday’s high-profile Constitutional Court (ConCourt) election challenge hearing to their different world audiences will have to pump out up to US$13,000 to get the ZBC live signal from the apex court.

ZBC was granted the sole right to broadcast the MDC Alliance poll challenge at ConCourt.

According to a special rate card for Wednesday’s proceedings, ZBC-TV is demanding $13,073 for those wishing to pick up uninterrupted live feed from start to end of the event.

Broadcasters who choose to go by the second option of uninterrupted hourly rates will fork out US$1,815 per hour.

For radio, the state broadcaster is charging US$5,217 per day for those who wish to get uninterrupted live feed from start to finish while uninterrupted hourly rates for radio will come at a cost of US$725 per hour.

What is sure to irk locals is that the cash-strapped broadcaster, which operates under tight government control, could be going against the spirit of the country’s economy which emphasises on a multi-currency regime. ZBC has pegged its payments in US dollars.

The ConCourt hearing has been triggered by a petition filed by the losing MDC Alliance candidate who is adamant President Emmerson Mnangagwa’s narrow poll victory was acquired fraudulently.

Both the Zimbabwe Electoral Commission and government deny any foul play.

Media rights lobby, Media Institute of Zimbabwe (Zimbabwe) last week filed an urgent ConCourt chamber application requesting the court to allow the event to be live cast on social media which has a wider and extra-terrestrial character as opposed to ZBC.

“Misa Zimbabwe firmly believes that granting broadcasting rights solely to ZBC goeas against the spirit of a pluralised media environment envisaged in Zimbabwe’s constitution,” said the group in a Monday statement.

But in a response to the challenge, the ConCourt Registrar said they have already addressed the issue by allowing the country’s sole television broadcaster to beam the event to all.

The country’s elections have come as a financial boon for the broadcaster which has been exorbitant fees for political parties and candidates who were wishing to air their campaign content.

During the period leading to the July 30 election, the main opposition was up in arms with the national broadcaster for demanding up to $1,5 million in one month for the opposition to air its campaign material.

ZBC has come under fire from among Zimbabweans and the opposition in particular for alleged bias towards the ruling Zanu PF party.

At a media briefing on his party’s position of the ConCourt challenge Monday, Chamisa urged ZBC to be “visited by winds of sanity”.